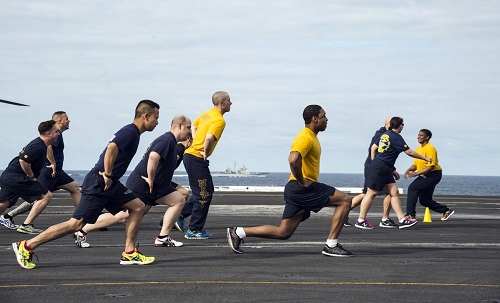 APRIL 10, 2017, ATLANTIC OCEAN (NNS) – Twice a year all Sailors are tested to see just how physically fit they are. The Physical Readiness Test (PRT) is the Navy’s way of maintaining a standard of necessary physical fitness for everyone in uniform.

Cycle 1 PRT of 2017 is scheduled to take place in early May, and Sailors are advised to prepare themselves by working out and becoming acquainted with the standards for their age and gender.

“We have a standard to uphold throughout the military for both fitness and appearance,” said Chief Aviation Support Equipment Technician Daniel Wynne, a command fitness leader (CFL) aboard USS Dwight D. Eisenhower (CVN 69) (Ike).

The PRT can be broken down into two main components, both of which are administered by the command’s CFLs. The first part is the Body Composition Assessment (BCA) where height and weight are recorded in contrast to body measurements in order to analyze the Sailor’s total body fat percentage.

“The Body Composition Assessment (BCA) is a prerequisite to the PFA,” said Chief Aviation Boatswain’s Mate (Handling) Charles Branch, an Ike CFL. “It is a way to see the body fat percentage of Sailors, not only for health reasons, but because we have to be physically fit to perform our duties and we are an organization seen all over the world and we want to present a positive image.”

The second part of the PRT is the Physical Fitness Assessment (PFA). The PFA is measured in three parts: push-ups, curl-ups and a cardio performance test. For the cardio test, Sailors can choose between the traditional mile and half run over a predetermined course, a 500-meter swim, a mile and a half on a treadmill, or 12 minutes of continuous workout on an elliptical or stationary bicycle where a certain number of calories must be burned in proportion to body weight.

“I want to remind Sailors to check what numbers they have to get before they do the PRT,” Wynne said.

Wynne reminds Sailors that physical fitness should not only be a priority for their Navy career, but a vital part in living a “Physical fitness isn’t just being a good Sailor, it’s good for your life in general,” Wynne said. “It makes everyday things easier, and you need to keep your body healthy to live longer.”

Sailors are advised to complete self-assessments after looking up their scores, to ensure they are prepared for the test this May. Sailors can obtain further information or assistance by contacting one of their command’s CFLs or divisional assistant CFLs.

Ike and its carrier strike group are underway participating in a sustainment exercise designed to maintain deployment readiness as part of the Optimized Fleet Response Plan (OFRP).