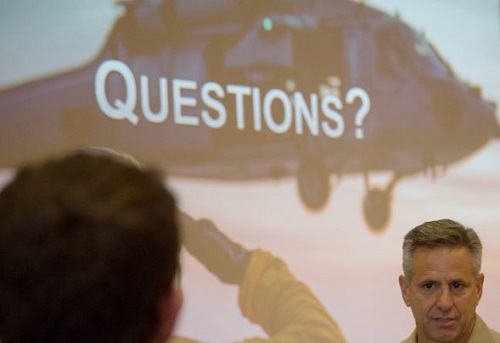 A heavily weighed upon topic was the new Sailor 2025 initiative.

The program is designed to improve and modernize personnel management and training systems to effectively recruit, develop, manage and reward Sailors, all in an effort to retain the force of tomorrow.

“We are talking about some of the Sailor 2025 initiatives that would bring potential changes to what’s going on with the evaluation system and ready relevant learning, an issue that we read about, but don’t discuss on a daily basis,” said Command Master Chief Jon Lonsdale, of Naval Surface Squadron Fourteen. “Some initiatives have pretty lasting ramifications on a Sailor’s career. We are talking the blended retirement system, things like that. We have to be smart about it and be able to get all of the information down to the deck plates.”

“We will continue to discuss Sailor toughness,” said Force Master Chief Jack Callison, of Naval Surface Force Atlantic, “by informing the CMCs via face-to-face conversations, giving them the tools and talking points so they can be understood, so they are able to execute and get the information down to the junior Sailor on the deckplate.”

Toughness is an essential attribute for Sailors, especially with escalating tensions in the 5th, 6th and 7th Fleet area of responsibilities. The evolution of the preparation and development of Sailors is an important part of Commander, Naval Surface Force Atlantic, Rear Adm. Patrick Piercy’s toughness initiative which is aimed at readying Sailors for whatever the future holds.

“I’m taking away from this symposium the value of toughness and identity and assuring that junior Sailors coming onboard our ships actually understand why they joined the Navy,” said Command Master Chief Sarah Gomez.

In October 2000, Gomez was stationed onboard the Arleigh Burke-class USS Cole (DDG 67) when it was attacked by suicide bombers while refueling in Aden, Yemen.

“For me, being a part of the Cole attack changed my perception of things,” she continued. “I have a very good understanding as to what we do, why we have force protection, why we have medical drills, general quarters, damage control and why that is so important.

“I put that into play here in this day and age, because of my Cole experience.”

The CMCs also discussed where the Navy is going and how these current initiatives will impact the Sailor of today and the Navy of tomorrow.

“Senior enlisted leaders are always interested in manning issues,” said retired Force Master Chief William Slingerland. “Every day, there is something new that comes out in Navy Times; there is a NAVADMIN (Naval Administrative Instruction), and there is an Operational Naval Instruction about change. Managing change is important. The way you affectively manage those that are in influential positions that have the exposure to the greatest number of Sailors and their families, is to communicate the reason behind so much of the change that we are encountering today.”

“I’m so happy to be invited to join this symposium,” said Slingerland, who was SURFLANT Force Master Chief from Nov. 2001 to June 2002. “Sometimes we have something historical in nature to provide to the conversation.”

The symposium provided a look ahead into the molding of Sailors and what the expectations are from CMCs, in order to promote a culture of identity and toughness in building the future Sailor within the 2025 process.