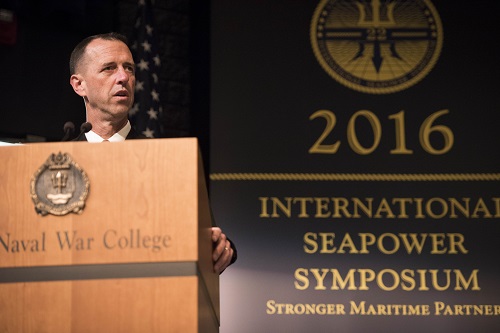 The theme of this year’s symposium was “Stronger Maritime Partners.”

ISS is the largest gathering of maritime leaders in history with senior representatives from 106 nations attending. The leaders took part in panels, discuss regional and global concerns, and examine current maritime topics.

During his closing remarks, Richardson highlighted need for cooperation the symposium provides.

“In a world in which the pace of change is increasing rapidly, in which the maritime environment is busier than ever, it is super important that we build trust and confidence across our navies — and that starts with us, at the top,” he said. “We have lots in common. We operate in the maritime, we’re each responsible to our respective nations for keeping the seas and rivers safe, and we each strive to cooperate with others to achieve our common missions.”

Richardson also noted the progress made at the three-day event.

“By virtue of our time together, we have strengthened our existing partnerships, created new bonds, and each have benefitted personally from time with our fellow heads of navy and coast guard,” he said.

Over the course of the symposium, maritime leaders heard keynote addresses on cooperative strategies, international norms and standards, and cyber in the maritime domain.

The biennial ISS was first held in 1969 in Newport and was designed to allow naval leaders from around the world to meet and discuss common issues they face, how to address these issues, and ultimately find solutions for them.

Established in 1884, the NWC is the oldest institution of its kind in the world. More than 50,000 students have graduated since its first class of nine students in 1885. Approximately 300 of today’s active-duty admirals, generals and senior executive service leaders are alumni.