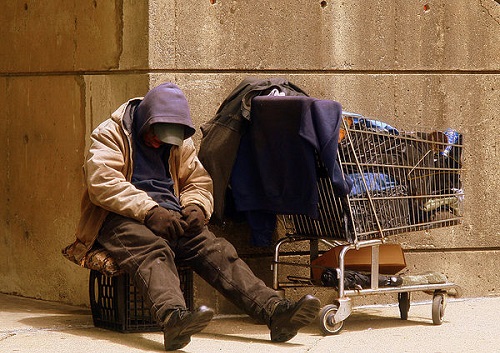 November 11, 2016, Raleigh, N.C. (NNS), By Tamara R. Dabney, Navy Recruiting District Raleigh Public Affairs – Every year on Nov. 11, we celebrate our American military veterans who have served our country in times of peace and in war.

Today, some of these same veterans are fighting a different type of war, right here on American soil — homelessness.

According to the U.S. Department of Veterans Affairs, approximately 11 percent of homeless people in the United States are veterans, despite veterans making up less than 8 percent of the U.S. population.

Poverty, mental illness and a lack of support networks are among the conditions that put veterans at high risk for homelessness.

One way to support American veterans is to serve alongside them in the fight against homelessness during the Stand Down for homeless veterans.

Stand Down for homeless Veterans events are held several times throughout the year in various cities across the nation. During the Stand Down, thousands of veterans are provided food, clothing, and health screenings, as well as referrals to other assistance, such as housing, employment and mental health counseling.

The hundreds of volunteers and professionals who give their time to assist with the needs of veterans are what make the Stand Down possible.

Petty Officer 2nd Class Vonketrick Moore, who recently volunteered for the Capital Area Stand Down in Raleigh, North Carolina, said that while he enjoyed volunteering for the Stand Down, the event was a tough reminder of a problem that is much too common.

“I am happy to come out here and serve veterans. From talking to them, I know that they were once in my position, doing well in life,” said Moore. I know veteran homelessness is a big problem. It’s unfortunate, but I think that events like this are needed, so I’m glad I came out.”

Veterans Services Officer and Stand Down Event Coordinator John Youker works with homeless veterans every day at a shelter in Raleigh. He sees more than 200 homeless veterans check in to the shelter every year. About every two days, a homeless veteran comes to their wits end trying to survive on the streets, so they go to see Youker for help.

“The veterans that come in here either suffer from mental illness, have a lack of life skills, or just have no family or friends to turn to for help. We have to assist them in breaking the cycles of mental illness and bad decisions that lead to homelessness,” said Youker.

However, there is hope. Youker said that although homelessness among veterans is still a pervasive problem in the U.S., he is very optimistic that one day, it won’t be so common.

This Veterans Day, as we honor the courage and sacrifices of the men and women who have served in our military, we must not forget the fight that many of them still face here at home in America. Homelessness among veterans is a fight that we can win together.

Information on how to volunteer for the Stand Down for homeless veterans can be found the U.S. Department of Veterans Affairs official website.