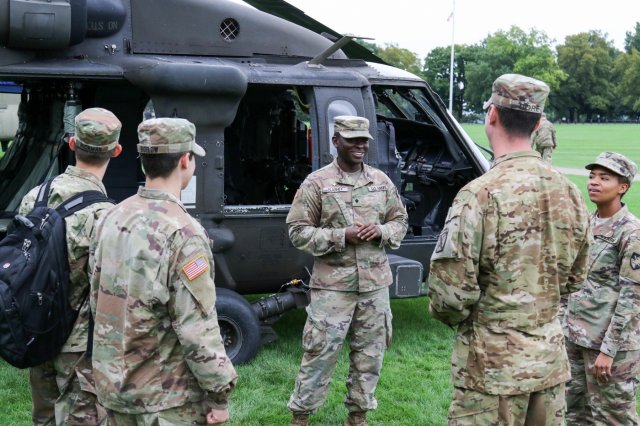 SEPTEMBER 13, 2019 – The members of the Class of 2020 will receive their branches in November, but the process of assigning them will be different than ever before.

The U.S. Military Academy is serving as phase one of implementation for the Army’s new Market Model branching system, which will roll out to ROTC programs throughout the country next year. For the first time, commandants of each of the 17 branches will have not only a voice in the process, but an actual vote in which cadets receive their branch.

The commandants of the branches will now have the opportunity to rank the cadets as most preferred, preferred and least preferred. The rankings will be based on the cadets’ branching resumes, which includes their test scores, transcripts, physical fitness scores, a personal statement and more, as well as interviews the branches will be conducting with interested cadets for the first time.

The cadets’ branch rankings and the branches’ cadet preferences will then determine a cadets’ branch using a modified version of the National Resident Matching Program’s algorithm, which won a Nobel Prize for Economics in 2012 and pairs medical school graduates with residency programs.

The Market Model system is initially the cadet proposing for a branch. A cadet’s branch ranking list is used to tentatively pair him or her with a branch. For example, if a cadet’s first choice is engineering, he or she will tentatively be awarded engineering until the slots are full.

“The Army did not dictate to them, you’ll put 333, 333 and 333,” Maj. Jared Sunsdahl, USMA Accessions Division Chief, said. “You’ve got to look at the size of your branch, how many people you’re looking for and then you put them into that bucket. Then within that bucket, that’s where the USMA OML comes in. So, if you and I are both most preferred you are cadet 42 in the class and I’m cadet 900, I’m below you within that bucket.”

Say for instance the engineer branch has 100 slots and places 150 cadets in the most preferred bucket. If the top 100 cadets have engineers ranked as their top preference, they will be slotted into that branch. The 50 remaining cadets, although they were most preferred for engineering, would then be bumped down to their second preference and go through the process again until they are paired with a branch.

“Let’s say I’m in the preferred bucket, you draw the cut line at 125 and I’m going 124th in that branch, then I get the branch,” Sunsdahl said. “It’s cadet proposing so it goes into that bucket until there’s no longer any slots remaining. And then it bumps you out and goes to your next preference, so on and so forth (until assigned).”

The twist in the process is the ability to take on a Branch of Choice Active Duty Service Obligation. A BRADSO is a commitment to serve three additional years on top of the five required of all West Point graduates in order to increase your chances of getting the branch you desire.

Offering to BRADSO cannot change your bucket and take you from being preferred by the branch to being most preferred. What it will do is move cadets up within their buckets, which are split in half with the cadets willing to BRADSO ranked by OML at the top followed by the non-BRADSO cadets ranked by OML in the bottom half.

“If you’re cadet number 25 in that most preferred bucket, and I’m cadet number 45 and I’m willing to BRADSO and you’re not, I move above you,” Sunsdahl said. “Now, 45 is above 25 and then depending on how many branch allocations there are, you may not have received that branch because there were only so many allocations left.”

Cadets in the Class of 2020 will lock in their branch rankings for the sixth and final time between Sept. 23 and 29 following Branch Week. When they do so, they will have all the information needed at their disposal. The commandants have to lock in their rankings by Sept. 19 and then West Point’s Department of Military Instruction will run a simulation using the branches’ preferences and the cadets’ fifth branch ranking, which was locked in a couple weeks ago.

The cadets will then be told which branch they would have received, how each branch ranked them, have the chance to change their branch rankings and decide whether to BRADSO. The main difference between the simulation and the actual process will be the lack of a branch board where senior leaders at the academy make final adjustments to the branch allocations after the computer makes assignments.

“We’re going to tell all the cadets, we’re going to show all of them, here’s when the branch would have went out, here’s the bucket you’re in, here’s the branch you would have received if this were for real. You have six days to go ahead and redo your preferences and look at if you want to BRADSO or not,” Sunsdahl said. “I think it’s good to be transparent. I just don’t know what 21-year-olds will do with that information.”

The goal of the new Market Model is to better pair cadets’ talents with the needs of the branches. Whereas branches used to receive cadets based just on OML, they now have an active vote in the process by reading the cadets’ branching resumes and conducting interviews with them either over the phone, via video chat or face-to-face. On average, each cadet is interviewing with about three branches, Sunsdahl said.

“It is a significant increase in workload, but I think the payoff is going to be well worth it,” Col. Mark Quander, commandant of the engineer school, said of the interviews. “We are doing almost 300 interviews. I think what we are doing is we are sharing this opportunity across the regiment to involve all leaders across the regiment as we look for and try to assess future engineers.”

The goal with the new system is that by better aligning talents between branch and cadet, the branches will see increased performance, better retention of junior officers and the Army as a whole will be more ready to face the challenges of the future.

“We are preparing our branch for the future,” Quander said. “The lieutenants we are bringing in now, by 2035 they’re probably going to be battalion commanders. We’ve got to assess those folks now. We have to grow them. We hope to improve the process, so we are growing that future battalion commander.”