WASHINGTON (Army News Service, April 24, 2013) — The Army says a round of base realignment and closure for fiscal year 2015 is necessary to save tax dollars, consolidate resources and adapt to force reductions.

With a smaller total force over the next years — from a high of 570,000 in 2010 to 490,000 in 2017 — the Army’s need for facilities will also decrease, said Katherine Hammack, the Army’s assistant secretary for Installations, Energy and Environment.

“With a reduced end-strength and force structure in the United States, now is the time to assess and right-size the supporting infrastructure,” she said.

Hammack said the Army is already downsizing its infrastructure in Europe, and that it is working closely with the Office of the Secretary of Defense to examine whether there are additional cost-saving opportunities in Europe through joint or multi-service consolidation.

Infrastructure changes in Europe, while important, are not part of base realignment and closure, known as BRAC. The BRAC process — including past rounds of BRAC and any future rounds of BRAC — applies only to installations in the United States.

“A future round of base realignment and closure in the United States is essential to identify excess Army infrastructure and prudently align civilian staffing with reduced uniform force structure, just like we are doing in Europe,” she said.

For fiscal year 2014, the Army requests $2.4 billion for military construction, Army family housing and the Army’s share of the Department of Defense base closure account, said Hammack. She said the request represents a 34 percent decrease from the fiscal year 2013 request.

“Putting excess property back into productive reuse can facilitate job creation, help communities building the local tax base and generate revenue,” she said. “In total, the Army has conveyed almost 78 percent of the total prior BRAC acreage.”

“With the fiscal challenges we are facing, the Army has closely reviewed the facility investments to determine the level of resources needed to support the force,” Hammack said. “Supporting the force requires appropriate facilities, training ranges, maintenance and operations. And that’s where we have focused.”

Hammack said the most important aspect of the Army is its human element.

“The Army’s strength is our Soldiers, families and Army civilians who support them,” she said. “They are and will continue to be the centerpiece for the Army.”

John Conger, the acting deputy undersecretary of defense for Installations and Environment, testified that a BRAC round is needed for fiscal year 2015, but it must be executed in a careful manner that does not affect the warfighter.

“The department is facing a serious problem created by the tension caused by declining budgets, reductions in force structure, and limited flexibility to adapt our infrastructure accordingly,” he testified.

“Without question, installations are critical components of our ability to fight and win wars,” he said. “However, we need to be cognizant that maintaining more infrastructure than we need taxes other resources that the warfighter needs — from depot maintenance to training to bullets and bombs.” 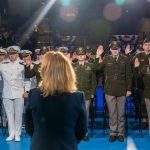