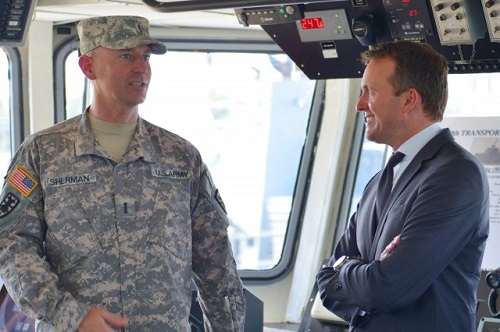 AUGUST 30, 2016, JOINT BASE EUSTIS-LANGLEY, Va. – Secretary of the Army Eric K. Fanning wants the nation at large to understand its Army better. His intent is not a personal goal, but rather a mission he has directed the Army to take, he said during a recent visit to Joint Base Langley-Eustis, Virginia, Aug. 25, 2016.

Fanning’s day began with keynote remarks at the U.S. Army Training and Doctrine Command Commanders’ Forum, during which he discussed his focus and priorities for the Army’s way ahead, such as resourcing, building the budget, sequestration and hot topics on Capitol Hill.

He placed special emphasis on joint warfighting as well as transparency and communication across the Army.

“We are a joint force now,” said Fanning. “We rely on the Air Force, we rely on the Navy, but they all definitely rely on us. Where that joint fight comes together in so many ways is on the ground with the Army. We need to think about that and talk about that differently than we do, and really embrace what we do in support of the joint force that nobody else can do in our military or any of the militaries in the world.”

Fanning addressed questions from senior leaders present for the forum, a quarterly information-sharing gathering that guides the development and execution of Force 2025 and Beyond, and provides guidance on the execution of TRADOC core functions.

He provided answers regarding cultural strategies he has observed that could benefit the Army for the future, possible risks and opportunities that may arise from the upcoming presidential election, the Army’s 2017 audit readiness requirement, and the merge of medical capabilities under the National Defense Authorization Act.

Fanning emphasized his intent for the nation to know more about their Army when he addressed a question on how senior leaders can tell the Army’s story as part of “Meet Your Army,” an outreach initiative where the Army is sending Soldiers and leaders out to communities where the Army has little or no presence so community members can get to know the Army better. He suggested that leaders tell stories “through the eyes of the Soldiers” because “those are stories that you can take that tell all the amazing things that our Soldiers are doing.”

The secretary also spoke with senior leaders’ spouses separately where he took note of and addressed concerns that affect families. He also stressed his commitment to the Army’s fight on sexual assault.

“We’ve done a substantial amount of work on response but not enough on prevention. I want to make the response part unnecessary and the prevention part right,” Fanning said.

Fanning provided his insight on linking behavioral health to suicide prevention and post-traumatic stress disorder, relating a recent medical visit he had when a brace was placed on his elbow. He alluded to the fact that many people would not hesitate to seek medical help when they have a physical ailment but that does not always seem to be the case when it’s mental.

“Most people’s brains are more complicated than my elbow, I think mine is,” he said. “Why would we have a stigma attached in seeing a specialist for the most complex organ in the body?”

In the spirit of seeing stories through Soldiers’ eyes that involve joint operations, Fanning concluded his trip by visiting with vessel crewmembers and Army divers of the “Army’s Navy” at the 7th Transportation Brigade (Expeditionary) located at Third Port to get a firsthand look at how they contribute to the fight.

“Recently for the Navy we towed one of their tugs from Guantanamo Bay to Florida and we’re going to tow it back in the near future, and we also did a barge mission for them towing equipment,” said Sherman, the most senior tug vessel master at the 73rd. “All told, we’ll have saved the Navy about $300,000 instead of using contracted civilian tugs.”