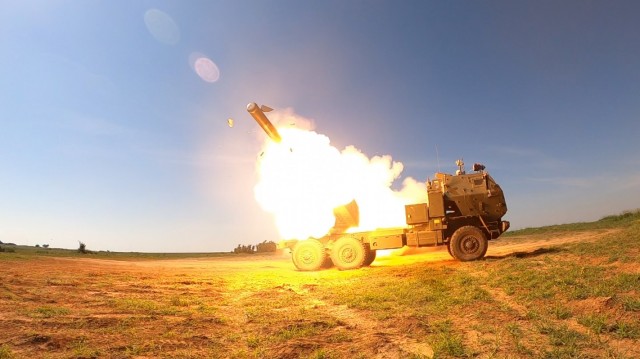 JUNE 24, 2021 – It’s a concept that would thicken the force and increase mass fires – and it’s one step closer to reality for the Warfighter.

A total of seven rockets were fired, showcasing AML’s lethality potential in anti-access/area denial (A2/AD) multi-domain operations, particularly in the Indo-Pacific theater, the focus of the demonstration’s simulation.

To demonstrate the concept via a surrogate AML system, the test team applied remote driving and firing kits to a High Mobility Artillery Rocket System, allowing for the surrogate to demonstrate semi-autonomous launcher driving and launcher control capability. All operations of the technology demonstration were conducted by field artillery Soldiers from Fort Bragg, North Carolina, with subject matter experts from DEVCOM AvMC and DEVCOM GVSC collecting feedback to guide future design demonstrations.

“This is an important first step to see what this looks like,” said AvMC Director Jeffrey Langhout. “Twenty years ago we would have probably never done it this way, but because of who we are today, the very first time we put this together, we had real Soldiers doing the operating. Everything was done by Soldiers. All the engineers and all the great technologists were sitting out there and watching and cheering them on, but they were doing all of the work. It was great to be a part of.”

“Our whole job was to prove that it is possible to control and drive this size vehicle remotely, bring it down to a heading that is desired, and remotely fire it,” said Lucas Hunter, AML project manager for DEVCOM Aviation & Missile Center. “The AML Surrogate responded to commands as expected. This allowed our team to confirm that it is possible to control all actions necessary to emplace and attack a target from a remote location. We have also learned a great deal about design considerations from an operational perspective that will be incorporated into a future AML design.”

“This gives the Warfighter an agile, deployable, mid-range capability that will be survivable in an archipelagic operational environment, island hopping type of campaign, to engage a variety of A2/AD targets,” said LRPF CFT Director Brig. Gen. John Rafferty.

While the demonstration identified physical and cybersecurity challenges for the unmanned launchers and evaluated communication needs for manned-teaming, the bread and butter of the nearly three week event was the opportunity for DEVCOM engineers to work side by side with the Warfighter. Engineers gathered valuable feedback, whether it was the mechanic ensuring the oil had been checked on the vehicle or capabilities the Soldiers would like to see in future iterations.

“Any time you can get Soldiers, operators and engineers together — it’s impossible to overstate how important Soldier touchpoints are,” Rafferty said. “This gets right at one of the fundamental tenets of Army Futures Command, which is Soldier-informed development.”

From the ground up, the AML concept will be designed with the Warfighter in mind.

“Every individual has a different view, so the more input we have, the better this will be,” said Lauren Ruta, a member of the AvMC AML test team. “It’s good for both sides, because as engineers, we design this but we’re not the users. There’s a huge disconnect between us designing and the actual users, because we don’t always know exactly what they need. Seeing what will really help them helps us make the design better. It’s good for the Soldier because they oftentimes just get equipment, but they don’t always get to see the work that went into designing it.”

For members of the 18th Field Artillery Brigade, having their voices heard and offering insight into a concept that may one day make it into theater was an exciting prospect.

“Our job here is to figure out what’s the difference between AML and what we always do, so we can give good, constructive feedback on what we do in the field every day versus what they have so far,” said 1st Lt. Janeen Smith with the 18th Field Artillery Brigade. “My crew is super excited. Later in life we can explain to everyone, ‘This is what I was a part of. I was part of the making of that.’”

The Autonomous Multi-Domain Launcher (AML) is a Army Futures Command Long Range Precision Fires Cross-Functional Team, US Army Combat Capabilities Development Command Aviation & Missile Center, and Ground Vehicle Systems Center, Science and Technology initiative to develop and demonstrate an autonomous, unmanned, highly mobile, C-130 transportable launcher. The prototype launcher will be capable of leader-follower autonomy, autonomous way point navigation, drive-by-wire, and remote launcher turret and fire control operation. It will be capable of launching longer munitions while remaining compatible with the current munitions. This video is a SIMULATION of how this technology could be used by the future force, this is not a real event.

The DEVCOM Aviation & Missile Center, headquartered at Redstone Arsenal, Alabama, is the Army’s research and development focal point for advanced technology in aviation and missile systems. It is part of the U.S. Army Combat Capabilities Development Command (DEVCOM), a major subordinate command of the U.S. Army Futures Command. AvMC is responsible for delivering collaborative and innovative aviation and missile capabilities for responsive and cost-effective research, development and life cycle engineering solutions, as required by the Army’s strategic priorities and support to its Cross-Functional Teams.