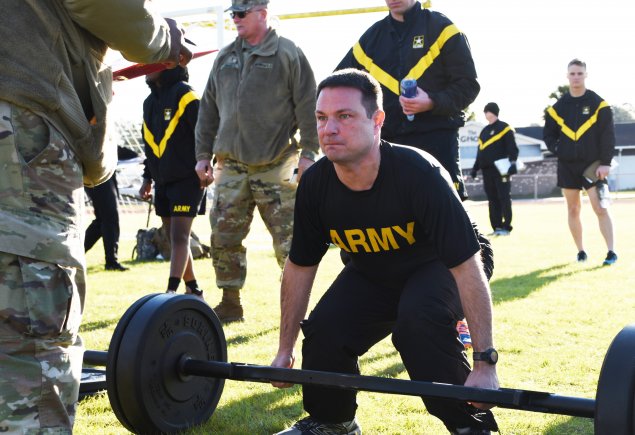 The idea is “to really start looking at Soldiers as professional athletes,” Esper said Friday morning while speaking at the Center for Strategic and International Studies.

The athletic trainers and therapists are slated to be assigned to brigades and some battalions later this year as part of a pilot program under the Army’s holistic health and fitness system.

The H2F system is overseen by the Center for Initial Military Training and a spokesperson there confirmed that 130 military authorizations will be allocated to units by the end of fiscal year 2019 to “enhance personnel readiness.”

Occupational therapists may also be in that mix, Esper said.

While most of the positions will go to brigades, some will be assigned to the 30 maneuver battalions that Army Forces Command selected last fall to train with health and fitness professionals in hopes of reducing Soldier injuries.

“In the future, once these take place and really take hold, we’ll have a more deployable and more capable force,” Esper said.

In 2016, the Army began placing athletic trainers at its initial-entry training centers. That year, 20 of them went to Fort Benning, Ga., to work with Soldiers at all five of the post’s training battalions. One goal was to prevent musculoskeletal injuries.

The sports trainers not only educated Soldiers on injury prevention, they also provided treatment to Soldiers following injuries to reduce their recovery time. Instead of sending injured Soldiers to hospitals, they were treated at their units and this saved a significant amount of training time, officials said.

Esper visited Benning to observe the extended OSUT training and said the results were dramatic.

“You’re seeing Soldiers with much higher physical fitness scores,” he said, adding that the infantry graduates were “much more competent, tactically and technically.”

The Army has also developed a new fitness test that Esper said better prepares Soldiers for the rigors they will face in combat.

The Army Combat Fitness Test with its six events “for the first time really links physical fitness with the demands and rigors of the battlefield,” he said.

In October, the Army selected 63 battalion-sized units to try out the ACFT as part of a pilot program. Mobile training teams went to the battalions to train NCOs how to conduct the tests. Now these 63 units will begin “field-testing” the ACFT.

Each of the battalions will need to conduct two ACFTs before October and space them about six months apart, according to the Center for Initial Military Training. The field tests will provide data to possibly adjust the ACFT grading standards before the test is adopted by the entire Army.

In October 2020, when the ACFT is implemented across the Army, officials expect it to further decrease injuries, improve personnel readiness and combat effectiveness.

“At the end of the day, the Army is a people business,” Esper said, “and people are our most important asset.”