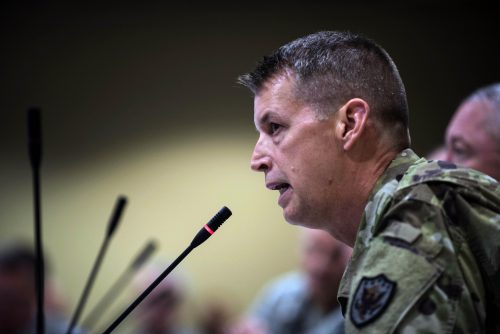 “Gen. Hokanson’s confirmation is great news for the National Guard,” said Air Force Gen. Joseph Lengyel, the chief of the National Guard Bureau. “He brings the invaluable perspective of a former adjutant general and former deputy commander of U.S. Northern Command, along with the experience of multiple combat deployments to the vice chief’s office. He is the right leader at the right time to help us navigate today’s challenging environment.”

As deputy commander, Hokanson helped lead NORTHCOM in anticipating, preparing and responding to threats against North America and within NORTHCOM’s assigned area of responsibility, and he provided oversight of the command’s defense support to civil authorities, to which the National Guard makes critical contributions.

He graduated from the United States Military Academy in 1986 and served in air cavalry, attack helicopter and aircraft test organizations before joining the Oregon National Guard.

He has commanded at the company, battalion and brigade combat team levels. His combat deployments include Operations Just Cause, Enduring Freedom and Iraqi Freedom. He commanded the 41st Infantry Brigade Combat Team in Iraq and served as chief of staff for Combined Joint Task Force Phoenix in Afghanistan.

Before serving at NORTHCOM, Hokanson was the adjutant general of the Oregon National Guard, responsible for providing the State of Oregon and the United States with a ready force of Citizen-Soldiers and Airmen, equipped and trained to respond to any contingency. His responsibilities also included Oregon’s Office of Emergency Management and the governor’s homeland security advisor.

Hokanson holds multiple master’s degrees, and he was a National Security Fellow at Harvard University’s Kennedy School of Government.