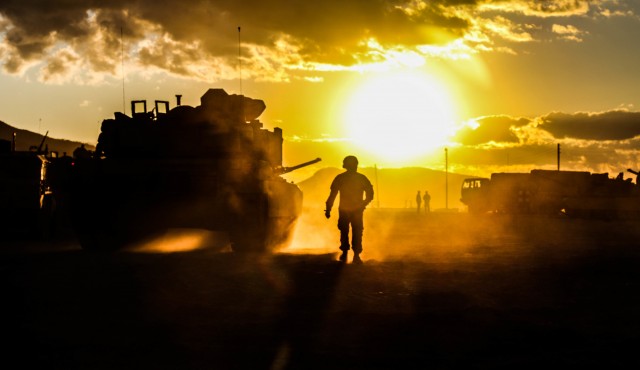 MARCH 2, 2020 – Armor, military intelligence and some quartermaster Soldiers will be the first to pilot a new assignment market system, as the Army looks into new ways to enhance the assignment process for enlisted personnel.

A small population of armor branch NCOs tested the marketplace process last year using spreadsheets and email correspondence, which resulted in improvements to the web application that will roll out in June, G-1 officials said. Plans call for fielding the new system to the entire force beginning in January 2021.

The pilot is a welcome addition when compared to the current assignment system that locks Soldiers into six basing options — three in the contiguous U.S and three overseas, Jefferson said during a Facebook Town Hall Monday hosted by Army G-1.

The current system “was not providing Soldiers with choices,” he said, adding that the new system will allow Soldiers to rank and order their assignment preferences, “to meet their family’s needs.”

“With the release of the Army People Strategy, we now have, for the first time, a roadmap on how to build the 21st-century civilian talent management process,” she said.

With the inclusion of direct hiring and non-competitive appointing authorities, the Army has decreased its civilian hiring time from around 130 days to less than 80 days, according to data collected during the first quarter of Fiscal Year 2020, Burton said.

The decrease in hiring time is due, in part, to the Army’s streamlined security clearance process for select occupations, she said.

Under the new process, the Army can submit an FBI fingerprint background check to clear an applicant, but only if they have no derogatory information in their record, Burton said. The FBI check takes approximately 24 hours, decreasing the time to process by weeks, sometimes months.

The Army is also piloting a new pre-employment drug test procedure at Fort Benning, Georgia and Sam Houston, Texas., Burton said. Under the pilot, a new applicant can start their onboarding process as they wait for their drug test to be approved, which could take several weeks.

“We know that less than 1% of the applicants come back positive on a drug test. It is a low risk, but we still want to be careful,” she said. “We are committed to trying to improve the process and reduce the hiring time.”

ARMY PEOPLE STRATEGY
The new assignment pilot and improvements to the civilian hiring process are just a few examples of how the Army is putting “people first,” officials said during the Facebook Live session.

Under the Army People Strategy, the force is refining the way it acquires, develops, employs and retains its Soldiers and civilian personnel, said Casey Wardynski, the assistant secretary of the Army for manpower and reserve affairs.

With the People Strategy, “it is clear that all our senior leaders are lined up and have a common vision,” Wardynski said. “[Army senior leaders] have a good idea of where we are heading, how we are going to get there … [and will play] a key role in allocating resources.”

The Army’s values of “honor, integrity, leadership, selflessness, and country,” is vital to acquiring new personnel, as the force brings in roughly 5,000 new officers and about 70,000 new active-duty Soldiers each year, Wardynski said.

“‘Acquire’ is something we have to worry about every day … because any gaps will show up down the line,” he added.

As the Army acquires the right personnel, they will also need to develop them through education, training, and credentialing, according to the People Strategy. Through meaningful employment, Soldiers and civilians will be able to “unleash their interests,” and maximize their contributions throughout the total force, Wardynski said.

For the first time, senior leaders are building a system that focuses on the people and what they “would like to do in the Army,” Wardynski said. Programs like the Army Talent Alignment Process and the Integrated Personnel Pay System-Army, or IPPS-A, allow the force to put the right person, at the right place, at the right time, he said.

“This is probably the most pivotal approach to people in the Army since the volunteer [force] way back in the early 70s,” Wardynski said. “In terms of national security, I think it gives us a huge edge. I don’t think other armies … are going to take this approach. That’s not in their culture.”

Alongside employment is the need to retain talented Soldiers and civilians throughout the force, he said. With the inclusion of IPPS-A, for example, the Army will have a better system to help transition active-duty Soldiers to the Guard and Reserve. IPPS-A is the Army’s centralized human resources and pay data system that is scheduled for full release across the National Guard at the end of March.