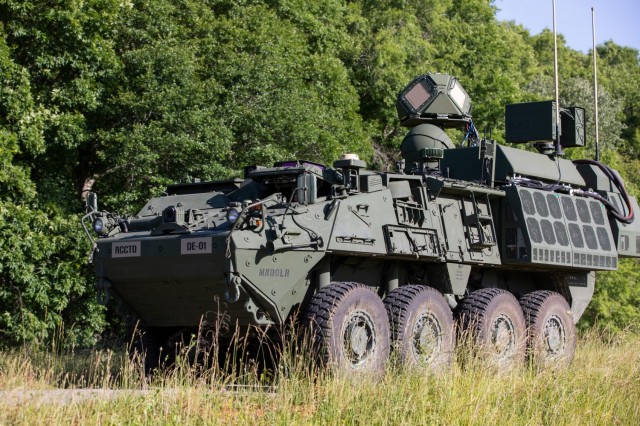 “Our goal is to deliver prototypes that Soldiers can use as the mission requires and that the Army can leverage as a baseline for a program of record,” Holmes said. “A Soldier-centered design is a key part to reduce risk and to ensure an operationally effective weapon system.”

A strong partnership between the Army Rapid Capabilities and Critical Technologies Office and science and technology industry leaders led to the development and implementation of the first prototype in 24 months, Holmes said.

The addition of the DE M-SHORAD and other directed-energy capabilities like the Indirect Fire Protection Capability-High Energy Laser, or IFPC-HEL, and IFPC-High Power Microwave are all designed to complement the Army’s kinetic air defense capabilities, said Craig Robin, deputy director of the RCCTO’s directed energy project office.

The unique design of the DE M-SHORAD leverages the Stryker’s gas-powered engine to energize its batteries, cooling system, and laser. The self-contained system has enough electricity to address multiple threats at a time before needing a period to recharge, he said.

“There are places where directed energy can provide a significant advantage,” he added. “All the bullets are built into the system, so the logistics associated with moving a platform and supplying it requires just gas and parts.”

Robin added that directed-energy systems are also more cost-effective from a life cycle perspective, making them a strategic tool to take out low-cost threats like an UAS to save the Army’s kinetic capabilities.

The Army plans to demonstrate the DE M-SHORAD capabilities during Project Convergence 21, where it will participate in a joint and coalition exercise later this year, said Col. Scott McLeod, the program’s manager.

“[PC 21] will be a big opportunity for us to show how we can integrate with our systems and demonstrate the capability against other threats,” McLeod said.

In addition to Project Convergence 21, the DE M-SHORAD development team will make minor adjustments to improve the device’s performance in the coming months, followed by several internal system verifications, he added.

“We are delivering a brand new capability -– it is not a modification or an upgrade. It is unlike any other system the Army has fielded to date,” McLeod said. “This event was a major step in the prototyping process and an informative waypoint as we move forward with building and delivering a prototype platoon in [fiscal year 2022].”