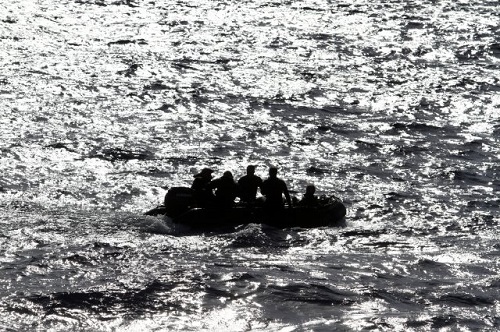 Assisting in the training is 545th transportation Company, 8th TSCs Logistic Support Vessel-2, the U.S. Army Vessel CW3 Harold C. Clinger, supporting the mission by providing transportation for the divers and the explosives.

“We’re doing our annual training on LSV-2 for underwater demolition,” said 1st Lt. Charles Masters, the executive officer for 7th EDD and diving officer and range officer in charge for the training. “It entails all of our guys going in and doing their checkoffs for dive as well as getting hands on demolition, making charges, inspecting the charges and then detonating.”

Each day, the group sailed out to the range with three charges for training, with a total of nine charges.

The charges were set to a depth of 65 feet and detonated using time-delay fuses to ensure everyone was able to get a safe distance away from the explosions.

Masters said that although there were other reasons, the primary purpose of the mission was the training itself.

“Secondary purpose is to get diver checkoffs for our Soldiers,” Masters said. “In order for us to move into the ranks, we need specific checkoffs for underwater demolition, salvage, etc.

“A tertiary purpose is to get data on the effects of underwater demolition to marine life in appropriate distances and seeing if that affects them.”

The divers used underwater cameras and a hydrophone to collect the data of the effect on the marine life created by the blasts.

A hydrophone is a device used for recording underwater acoustics that can’t be detected by humans.

Sgt. John Huff, a lead diver with 7th EDD, said training with explosives underwater can be scary at first but that you quickly get the hang of it.

“The first time it is, but after that it’s kind of second nature,” Huff said. “You just got to be confident and know your whereabouts in the water.”

Huff also said that these types of training missions are a great way for newer Soldiers to get hands-on experience.

“Giving new experiences to new guys, it’s always good to see how they react to everything,” Huff said. “The knowledge-base that each and every individual has combined as one always benefits everybody.”

Some of the impacts that slowed the training were primarily the weather, Masters said.

This included strong winds and high waves that made maneuvering difficult, along with the demolition not working properly.

Another impact the divers had to watch out for was the marine life in the vicinity of the charges.

“When we’re doing this underwater demolition range, we have to worry about marine life, especially marine mammals and turtles,” Masters said.

Masters said that despite the impacts the training was still a success and he enjoyed being able to do it.

“This is a great training opportunity and we’re really glad to be working with the LSVs and 545th to gather this information both for the Navy, the military and for this training for 7th Dive,” Masters said.