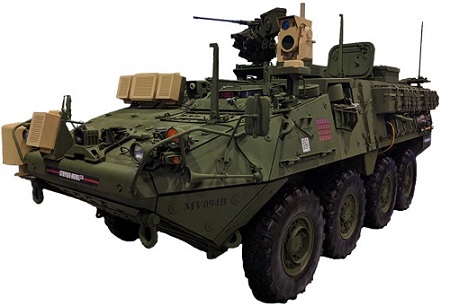 “The purpose of the JIDO UAS Hard-Kill Challenge was to assess and look at technology … to do a ‘hard-kill’ shoot down of Group 1 [unmanned aircraft systems] and inform decision-makers on the current state of technology and how it can deal with single and multiple targets,” said Adam Aberle, SMDC High Energy Laser Division technology development and demonstration lead.

MEHEL is a laser testbed on a Stryker-armored fighting vehicle chassis and serves as a platform for research and development. MEHEL 2.0 is an improved version of the original MEHEL with a laser upgraded from 2kW to 5kW and other added C-UAS capabilities.

MEHEL 2.0 also has a number of U.S. Army Aviation and Missile Research, Development, and Engineering Center counter-unmanned aircraft system mobile integrated capability components to increase the robustness of its capabilities.

SMDC’s Tech Center is the Army’s high energy laser science and technology development lead. The Army recognizes that high energy lasers have the potential to be a low-cost, effective complement to kinetic energy to address rocket, artillery and mortar, or RAM, threats; unmanned aircraft systems and cruise missiles.

During the JIDO challenge, MEHEL engaged small, fixed-wing unmanned aerial vehicles and quad copters in the first-ever integration of an Army laser weapon onto a combat vehicle.

“Getting everything integrated on the platform, being able to detect the target with the radar and then engage it with the high energy laser was very successful,” Aberle said. “We learned the 5kW laser was able to defeat the targets. We were able to verify and show that we could put a radar and a laser on a platform so it could self-cue to targets and that was very successful.

“We look forward to working with industry and continue to mature the technology because we believe this technology is critical to the Army and will be very beneficial once we are able to get the technology mature enough to transition it and field it one day,” he added.