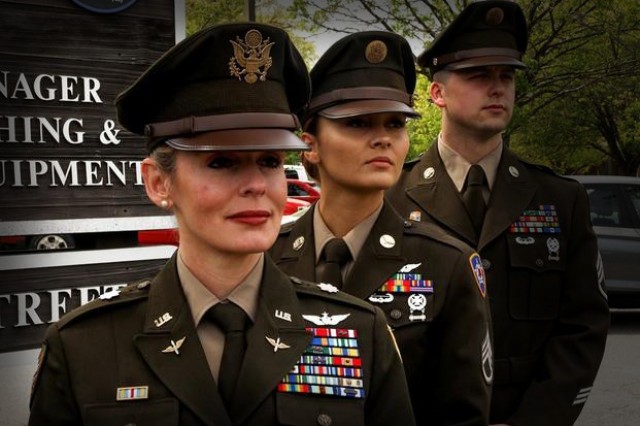 NOVEMBER 16, 2020 – The 152nd Army Uniform Board will convene on Nov. 18 to consider multiple issues, including changes to maternity clothing articles for expecting and new mothers. Specifically, the board is scheduled to make decisions on the Army Green Service Uniform-Maternity and a lactation shirt for the Maternity Utility Uniform in the Operational Combat Pattern.

In 2018, the Army produced a maternity uniform for demonstrations associated with the unveiling of the AGSU. That maternity uniform resembled the style of uniform that has been issued since the 1980s and was first designed in 1979. The AUB will discuss whether to modernize the maternity uniform or continue with the current style.

The AUB will also consider developing a lactation shirt, which would later become part of the Maternity Utility Uniform issue for new mothers. As things stand, a lactation shirt is not provided with the standard issue, and Soldiers must purchase them through private, commercial vendors.

The Nov. 18 meeting will be held virtually, and discussion will be led by the AUB Chairman, Lt. Gen. Duane Gamble, Deputy Chief of Staff of G-4. Members of the AUB include male and female Soldiers at all levels, and representatives from the active component, Army Reserve and Army National Guard. Each member has an equal vote in deciding which recommendations go forth to Chief of Staff of the Army Gen. James C. McConville.

The AUB meeting, which takes place twice each year, is the Army’s only forum to address the changing requirements of Soldiers’ uniforms and accessory items. All Soldiers can contribute to the Uniform Board process by providing recommendations to their sergeant majors. Incorporating the feedback from Soldiers is a big part of the AUB process.

Chief of Staff of the Army Gen. James C. McConville approved all of the AUB recommendations on August 28th. Program Executive Office (PEO)-Soldier will implement changes and authorizations to the clothing bag in accordance with manufacturing and contract timelines. Studies for the Maternity APFU, the army combat glove, and the athletic bra are forthcoming and will be evaluated at future AUBs.

The AUB is the Army’s only forum to address the changing requirements of Soldiers’ uniforms and accessory items. Every Soldier can contribute to the Uniform Board process by providing his or her recommendation to his or her unit’s sergeant major. Incorporating the feedback from our Soldiers is a big part of the AUB process.

Members of the AUB include male and female Soldiers of all levels, and representatives from the active component, the Army Reserve, and the Army National Guard. Each member has an equal vote in deciding which recommendations go forth to the Chief of Staff of the Army.