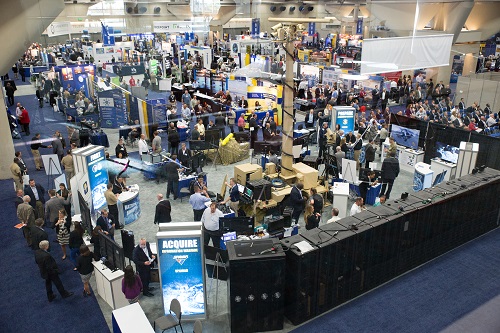 The three-day conference highlighted security and information warfare for the 21st century Sailor and warfighter, to include advances in technology in an ever-changing and fast-paced environment.

“We need commanders who can operate in uncertain contested environments,” said Vice Adm. Ted Branch, deputy chief of naval operations for information warfare. “These commanders must posses four traits. They must have integrity, accountability, initiative and toughness.”

The exposition welcomed West Coast sea service members free of charge to learn about how their jobs will be affected due to new innovations and improvements in security technology.

“I’m here with the expeditionary combat command booth and we are showcasing some of our everyday tools,” said Explosive Ordinance Disposal Technician 1st Class Jeremy Bixsby, Explosive Ordnance Disposal Unit 1. “This technology benefits the fleet because it helps us keep the waterways safer for commercial and military transit and transportation.”

Also featured at WEST 2016 was the convention’s new interactive smart phone application that gave users real-time notifications about the schedule of events, information about the speakers and locations of events happening throughout the convention center.

“This application has been very helpful,” said Lt. j.g. Jessica Hafey, assigned to USS Cape St. George. “I’ve used it mainly for the biographies of the keynote speakers and when they will be speaking. My favorite feature was the map which was very helpful with transiting the venue.”

Over the course of three days, topics addressed during various keynote speeches, briefs and panel discussions were defense budgets, threats to cyber security, and how leaders are working to improve these issues through a series of procedures and defense postures.

“We cannot wallow in our fears and our concerns,” said Vice Adm. Joseph P. Mulloy, deputy chief of naval operations for integration of capabilities and resources. “It is a brave and dangerous world, but we are the right people to stand up and move ahead because we have the smarts in this room and the smarts in the fleet.”