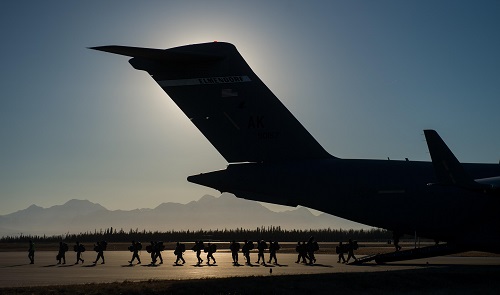 OCTOBER 20, 2016, FORT GREELY, Alaska (AFNS) – Over the course of 12 days in October, with temperatures dropping below freezing in the “Last Frontier,” Airmen from the 621st Contingency Response Wing provided rapid global mobility expertise during Red Flag-Alaska 17-1.

“The (621st) CRW’s role in the exercise is twofold,” said Maj. Dave Sustello, the 621st Contingency Response Support Squadron assistant operations officer. “We are setting up an intermediate staging base at Joint Base Elmendorf-Richardson to push cargo out the door and also have an 18-member team traveling to Allen Army Airfield and Donnelly Landing Zone to receive that cargo. This is all in support of the 4/25 IBCT as they conduct a forced entry into the (landing zone) as part of the exercise.”

“It gives us another opportunity to work with the Army and do things like the Haiti support (Joint Task Force Matthew) we are taking part in right now,” Sustello said. “This is yet another arena, (it’s) just (U.S.) Pacific Command as opposed to (U.S.) Northern Command or (U.S.) Southern Command. They all have slightly different rules and challenges with interoperability that you learn to work through. Through this exercise, we are paving the way for future support to PACOM operations.”

Throughout Red Flag-Alaska, 621st CRW Airmen worked with aircrew and aircraft from Joint Base Elmendorf-Richardson, Joint-Base Pearl Harbor-Hickam, Hawaii, and Dyess Air Force Base, Texas, as well as international aircrews and aircraft from the Royal New Zealand Air Force and the South Korean air force.

“The challenge with working with the Army, or any mission partner, is not having clear expectations of what each partner is bringing to the endeavor,” said Master Sgt. Brian Beaty, a 921st CRS contingency response team ramp coordinator. “In spite of this, one of the benefits is the opportunity to clearly articulate what our capabilities are and coming to an agreement on what is being asked of us to help complete the mission.”

The 621st CRW is a bicoastal wing with units stationed at Joint Base McGuire-Dix-Lakehurst, New Jersey and at Travis Air Force Base, California. Red Flag-Alaska allowed 621st CRW Airmen who are usually geographically separated to work together and build upon their already established relationships.

“We don’t usually have the opportunity to take part in inter-wing exercises, so we are really getting to build on relationships that we already have and solidify them from a wing-level standpoint,” Sustello said.