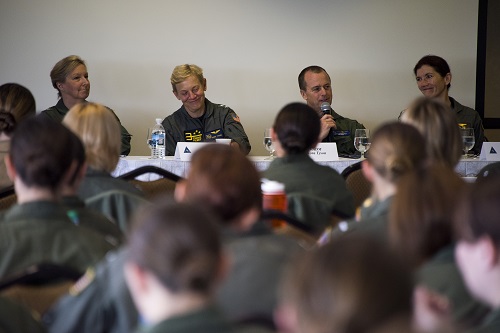 “This is my third year attending this symposium and it is [a]great way for females to bond, not only within their community, but to also see opportunities outside of their communities,” said Lt. Brittany Nelms with the “Blue Hawks” of Helicopter Maritime Strike Squadron (HSM) 78. “Female aviators should embrace the fact that you are a female in a predominantly male community and attend this symposium to learn what you can. A lot of the topics covered here are female-related topics, whether it is pregnancies, dual-military marriages, dealing with gender-bias or other topics and opportunities, this symposium provides a unique way to learn.”

“I was able to attend the first [FACTS] three years ago and it was really eye-opening to learn about programs in the Navy that help people stay in the Navy, especially women wanting to have a child and wanting to fly and stay on the path,” said Lt. Rachel Tompkins, a naval flight officer with the “Black Eagles” of Carrier Airborne Early Warning Squadron (VAW) 115. “Interestingly enough, we had a naval flight officer who became pregnant during her first tour and, luckily, our [executive officer] at the time knew ways to be able to help her continue on and stay in the community.”

“It was amazing to see that because a lot of the lieutenant commanders at the time automatically thought ‘oh where are we sending her?’ and no we aren’t sending her anywhere,” continued Tompkins. “She can still work, she is still capable of doing that, she just can’t get in the aircraft. It’s the same as a guy breaking his leg and not being able to fly for a year, but a lot of people just didn’t know that because there’s not a lot of information out there. So it’s really great having these [symposiums] so that people are learning. This year, I saw that there already are more men here and it’s great because they’re also the leaders in the community and it helps get the word out.”

“This symposium was a really good experience and I learned how important having mentorship is,” said Lt. j.g. Emily Kreyenhagen with the “Fleet Angels” of Helicopter Sea Combat Squadron (HSC) 2. “It also provided a forum to openly and comfortably address issues in depth by both junior and senior officers, whether or not they were female-specific issues.”

“We often wonder if our concerns are being heard and with this symposium, we at least know that they have,” Kreyenhagen added.

She also mentioned that learning about Tyson and Klein’s history of being roommates in flight school made her think about what possibilities her career may bring along with the people she builds relationships with. She said, “maybe one day I’ll be sitting up there a captain or maybe even an admiral with my old roommate.”

FACTS 2016 served as a platform for female aviators to professionally discuss and learn about the progression toward the future of naval aviation and emphasized the importance of having a mentor.