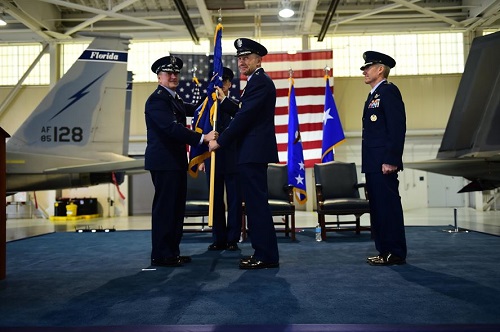 Goldfein congratulated the command on its contributions to global airpower and ACC’s role as the primary force provider of combat air power to America’s warfighting command.

“There has never been a more important time to serve in uniform,” he said. “You truly represent the greatest treasure in our nation’s arsenal, and I’m honored to serve with you as your 21st Chief of Staff.”

In his final address to the Airmen of ACC, Carlisle expressed his confidence about the future.

“I feel intense pride at what out ACC Airmen accomplish every single day across the globe,” said Carlisle. “I have absolute and complete confidence in Mike Holmes and Sara, that they are exactly the right team to lead this command in the future and into greater heights.”

Carlisle also expressed the pride he has in the Airmen of ACC and the support they provide in garrison, in combat operations, and in deployments. He thanked the Airmen for their service to their country and continued excellence.

Before taking the reins of ACC, Holmes’ served as the Deputy Chief of Staff for Strategic Plans and Requirements, Headquarters U.S. Air Force, in Washington, D.C. As part of his responsibilities, he led the development and integration of the Air Force strategy, long-range plans and operational capabilities-based requirements to ensure the Air Force built and employed effective air, space and cyber forces to achieve national defense objectives.

Holmes commissioned through Officer Training School in 1981 after receiving a degree in electrical engineering from the University of Tennessee. He is also a command pilot with more than 4,000 hours, including more than 500 combat hours in the F-15A/B/C/D/E Eagle, and has also flown the T-38 Talon, T-37 Tweet and T-1A Jayhawk.

This will be Holmes’ fifth assignment within ACC. He previously served as the commander of the 27th Fighter Squadron from May 1999 to July 2000.

“We now face new and revised challenges from both great and regional powers who threaten the survival of our American experiment, seek to isolate us from our friends and allies and hope to redefine the world on their terms,” Holmes said. “Our success and survival as a nation in the face of these threats are not guaranteed. It depends on all Americans to uphold ideals and make our union more perfect, but certainly depends on the capabilities you bring as part of a joint team. Yes, it’s a dangerous world and it grows more dangerous every day, but we will not be afraid, we will instead be ready. We will be ready to deter our enemies by demonstrating with certainty that we can defeat them.”