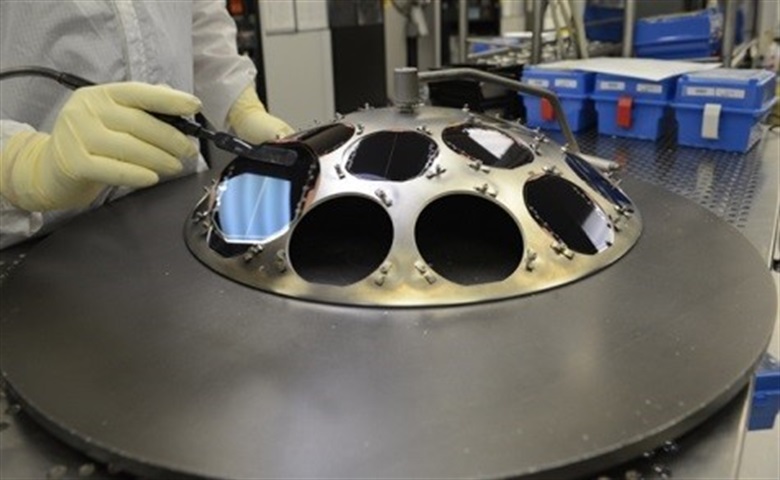 Experts at the Air Force Research Laboratory continue to expand the scope of their technological expertise, rising above the Earth’s surface to meet the power needs of next generation military spacecraft.

A collaborative effort between the AFRL Materials and Manufacturing and Space Vehicles Directorates, the Space Industrial Base Working Group and SolAero Technologies has resulted in state-of-the art, multi-junction solar cells destined to reduce costs and increase power efficiency for military space applications.

“These are the most advanced, efficient and affordable solar cells available for use in space,” said Kerry Bennington, an electronics engineer in the AFRL Materials and Manufacturing Directorate. “These cells provide 15 percent more power than current state-of-practice solar cells of the same size. Ultimately, you can get the same amount of power using less cells, leaving more mass and space for other applications on a space-based platform.”

As both military and civilian populations continue to rely more heavily on space-based applications for GPS, communications and more, satellites carrying these payloads require increased power to deliver additional capabilities. Maximizing power while decreasing mass and reducing cost has been an ongoing manufacturing challenge. In addition, the harsh operating conditions of the space environment, with extremes of heat and cold and high levels of radiation, require materials that can endure the volatility over long-term use.

Silicon solar cells, which are primarily used for terrestrial applications, are inexpensive when it comes to solar cell technologies, however, even the most efficient silicon-based solar panels only convert around 20 to 25 percent of sunlight to electricity. Silicon solar cells are extremely sensitive to radiation in space and experience severe efficiency degradation over time.

By contrast, modern spacecraft favor the use of multi-junction solar cells that take advantage of multiple layers of light-absorbing materials, each of which efficiently convert specific wavelength regions of the solar spectrum into energy. These cells, typically grown on germanium substrates, are more efficient than silicon and much more tolerant of radiation in the space environment. However, despite the increased output enabled by these types of cells, increasing payload power needs and limits in mass and volume of next generation spacecraft require continued development of more efficient, lighter cells of this kind.

To solve the efficiency and mass needs of the space community, a collaboration between AFRL, the U.S. government and industry was launched and ultimately led to the development and refinement of a new cell architecture that takes advantage of an upside-down growth process to manufacture multi-junction cells. The process results in what are called Inverted Metamorphic Multi-Junction solar cells, which are more efficient and a lighter weight than multi-junction cells currently in use.

“(AFRL) began looking at this specific technology back in the mid-2000s, recognizing that increasing power needs of spacecraft would require more efficient solar technologies,” said Bennington. “The challenge was to efficiently and cost-effectively grow IMM cells qualified for use in space.”

The process to grow IMM solar cells begins when thin layers of semiconductor materials are deposited on a growth substrate such as gallium arsenide. The entire device is turned upside-down, and the semiconductor materials are bonded to a mechanical handle. The growth substrate, which is now on top, is removed, and processing on the front-end of the device is then completed.

“We found that by growing cells upside down on gallium arsenide, we can more effectively tailor the material properties of the individual absorbing layers. This results in more effective utilization of the solar spectrum and produces cells with significantly better performance,” said Bennington. “By removing the rigid growth substrate, we end up with a cell that is lightweight and extremely flexible. A single IMM cell can convert more than 32 percent of captured sunlight into energy.”

The new IMM solar cells, said Bennington, are able to achieve a 15 percent increase in power when compared with a same-sized array of standard practice multi-junction cells. This enables engineers to decrease the mass and area of a solar array and still achieve the same power, leaving more space for other applications on a space platform.

The advanced solar cells are undergoing testing and qualification to the American Institute for Aeronautics and Astronautics S-111 standard and are expected to be space qualified this year. Recently, two CubeSats, each with 56 IMM solar cells as their only source of power, were placed on orbit, enabling these cells to gain flight heritage.

“This project shows the benefits and success of collaboration across AFRL, the Air Force, and the space industrial base. By working together, we create better technologies and ensure the American manufacturing base for the future,” concluded Bennington.