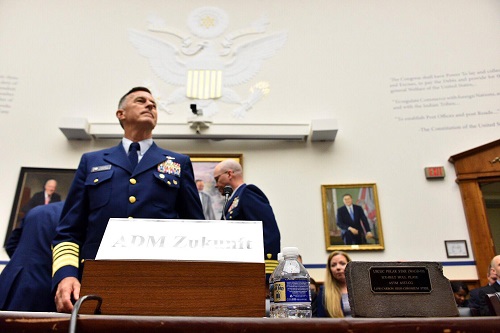 “Today, there are over 20 Coast Guard cutters committed to supporting DOD’s global operations,” said the Commandant during his opening statement. “And on any given day, there are five aircraft, two specialized boarding teams and an all-reserve, 130-member port security unit under the operational command of our DOD combatant commanders.”

Going further, the Commandant reaffirmed the Coast Guard’s proper homeport in the Department of Homeland Security.

“Our 11 statutory missions, they best align with those of the Department of Homeland Security,” said the Commandant. “And two of our highest priority regions – reining in transnational criminal organizations like never before across the Western Hemisphere, Central and South America before they reach the United States and exerting sovereignty while protecting safety of life at sea in the Arctic – do not rank high in the regionalized national military strategy.”

During the hearing, the Commandant also drew attention to the Coast Guard’s fiscal stewardship.

“We are the only military service that can say we have a clean financial audit opinion; we’ve done that now for four consecutive years,” the Commandant said.

Going further, the Commandant highlighted that a 5 percent annualized growth in the operations and maintenance account along with a $2 billion floor to its acquisition account would, “…allow me to dig out of the Budget Control Act basement, sustain operations and grow our workforce while concurrently building out our fleet of national security cutters, offshore patrol cutters, fast response cutters, icebreakers, inland construction tenders; reduce our shore infrastructure backlog of $1.6 billion; missionize C-27J aircraft and advance land-based unmanned aerial systems.”

The Commandant concluded his opening remarks by highlighting that the Coast Guard has remained an indispensable instrument of national security for nearly 227 years. He noted with the continued advocacy of the subcommittee, and with the support of the Administration and Congress, the Coast Guard will remain Semper Paratus into the future.