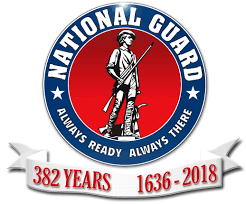 DECEMBER 12, 2018 – The National Guard is the oldest military force in the Department of Defense and will celebrate its 382nd birthday on Dec. 13, 2018. The Guard traces its lineage to the Massachusetts militias that defended their settlements and colony against attack, The National Guard has answered the nation’s call since 1636 when the first militias in North America were organized into three permanent regiments: East, South and North Regiments.

These regiments symbolize and evolved into the founding of all the state, territory, and District of Columbia military forces that collectively make up today’s National Guard.

The National Guard has the people, equipment and capabilities to save lives; minimize suffering; preserve or restore civil order; protect property; and maintain or re-establish communications. Guard members live and serve in more than 2,600 communities across the nation, less time and distance equals more lives saved. National Guard members were activated by their governors more than 200 times and logged more than 2.1 million man-days supporting domestic response in FY18.

The National Guard builds global partnerships. For more than 25 years, through the State Partnership Program (SPP), the National Guard has developed 75 enduring, cost-effective partnerships across all six geographic combatant commands. 28 SPP partner countries have co-deployed forces to combat missions in Afghanistan and Iraq since 2003. At any one time, up to 48 SPP partner countries provided more than 35,000 personnel to all 14 active United Nations peacekeeping operations.

The Army stays connected with American communities and affirms its rich Citizen-Soldier heritage and “Minuteman” spirit by celebrating the history of the National Guard. The National Guard continues its legacy of homeland defense and as an essential supporter of national security objectives.