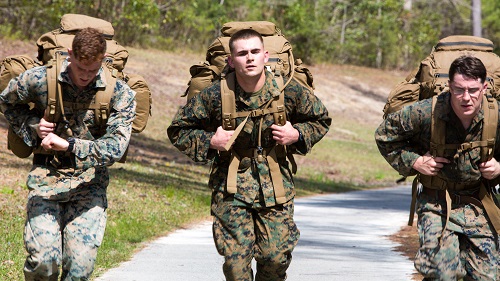 The Marines were searching for highly qualified candidates to train and send to the Scout Sniper Basic Course. Once Marines completed all the required training, they would become part of the scout sniper platoon within the unit.

“We’re running this so we can select the appropriate guys to join the platoon and get them ready for school,” said 1st Lt. William A. Anderson, a platoon commander with the unit. “We have Marines who meet the same standards required to go to the Scout Sniper Basic Course, so we try to replicate those conditions here to set them up for success.”

They tested the candidates’ ability to complete basic rifleman skills as well as examined the Marines’ character.

“We are trying to evaluate some of the more intangible things such as maturity and aptitude,” Anderson said.

Marines conducted activities such as foot patrols and land navigation while working on little food and sleep. All the Marines who tried out did it on their own volition.

“I wanted to move into something more elite,” said Cpl. Matthew A. Cassar, a squad leader with the unit. “I worked with snipers on deployment and saw how they operated. They were very professional and good at what they did, and that made me want to join them.”

The Marines were tested physically and mentally each day, challenging their will to persevere.

“If you’re not here for the right reason, then you will eventually break mentally when you’re already broken physically,” Cassar said. “If you don’t really want it then you’re not going to make it.”

Initially, 41 Marines came to try out for the platoon, but by the end of the screener only 11 remained. Of those 11, the scout snipers selected six and submitted their names for approval to become part of the platoon.

“It’s a very sacred process,” said Cpl. Joseph R. Roland, the chief scout with the unit. “This is a very tight-knit community, so to uphold the standards means everything to everybody in this community.”