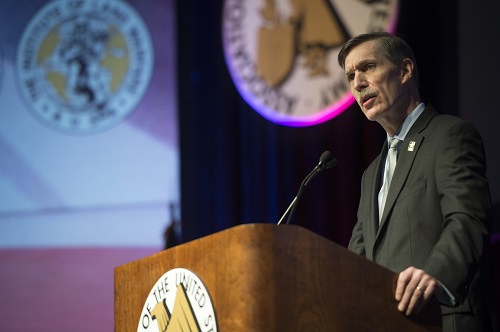 MARCH 16, 2017, HUNTSVILLE, Ala. (Army News Service) – The most formidable threat the Army faces today is not a resurgent Russia, a more sophisticated Chinese military or even terrorist networks. It’s unpredictable funding, one of the Army’s top civilians said Tuesday.

Over the years, the Army’s modernization efforts have suffered because of unpredictable funding due to Congress not passing budgets, according to Karl F. Schneider, the senior official performing the duties of the Army’s under secretary.

“The real threat to our mission is the lack of consistent, reliable and sufficient funding,” Schneider said, while speaking at the Association of the United States Army’s global force symposium.

More than 120 programs — almost half of them brand new — that improve modernization and give the Army more weapons and platforms are now delayed. Much of their funding has been diverted to maintain readiness. “We’ve been mortgaging our modernization future to take care of mission readiness,” he said.

The National Defense Authorization Act for fiscal year 2017 recently increased the Army’s active component by 16,000 to an end strength of 476,000. While that could eventually cost the Army billions of dollars to grow its force, the service has not yet received any funding for it.

“We didn’t get the money for that,” Schneider said in an interview. “We are recruiting those Soldiers, we are retaining Soldiers and we are doing our best of what Congress has told us to do, but we’re spending money in hopes that we’ll get that money back.”

The Senate still needs to pass a spending bill for fiscal 2017 after the House recently passed its version, which was favorable to the Army, he said. If not passed by April 20, the Army would remain operating on a continuing resolution.

If the Army does not get reimbursed, he said, those costs may be taken out of readiness accounts, leading to combat training center rotations and other training being canceled. “We really don’t want to do [that] because that erodes readiness, not only today but tomorrow and into the future,” he said.

Despite the hurdles, today’s Army is still taking care of business with 184,000 Soldiers in over 140 countries, and its reach extends to many other areas. “We contribute more money, more support for infrastructure, more contracting and more logistics to support the joint force than any other service,” Schneider said.

But the Army’s future force may not be as robust if it has to deal with out-of-date systems and stronger potential adversaries. Some of those, he noted, now have missile, rocket and artillery systems with a farther range than those found in the U.S. Army. New threats by unmanned aerial systems, cyber and electronic warfare capabilities are also concerns.

“Our aging systems are expensive to maintain and no longer provide the overmatch we need to win,” he said. “There may actually be an unforgiving window in the next decade where a few adversaries can achieve parity in some capabilities with us.”

Innovation from industry partners can help fill in the gaps of capabilities, he said, adding the Army must take advantage of technological advances the private sector has been making.

“We must be more open and willing to work with our industry partners,” he said, suggesting that more solutions can come from business incentives and less bureaucracy.

Any new technology that keeps Soldiers better equipped and safe while in combat could also touch on all three of the acting Army secretary’s three priorities of readiness, people and resources.

“This will enable us in the future to ensure that our Soldiers never have to face a fair fight,” Schneider said. “Regardless of political party [or] administration, this is our shared and sacred obligation.”