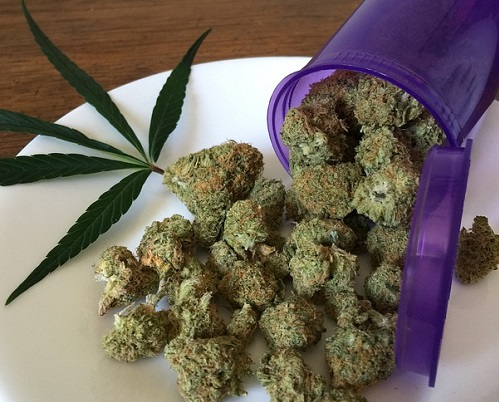 June 27, 2016, by Jerry Nelson – Do you want to be a criminal or agonize in pain? That’s the choice that millions of chronic pain sufferers are forced to make each day. Thanks to the tangled web of laws in America, legislation has not kept pace with reality, and people are forced into the vise of choice.

As the struggle between medical marijuana and prescription painkillers continues in America, many patients are stuck at the crossroads. The problem may be especially acute for America’s veterans.

The Veterans’ Administration doesn’t always help; the current classification of marijuana gets in the way of research, and the molasses-like pace of bureaucracy adds to the problem. As a result, many veterans are turning to online pharmacies to help alleviate symptoms as they move from prescription opioids to alternative painkillers such as marijuana.

A dispute in Topeka, Kansas may best illustrate the ongoing issue. Vietnam Veteran Gary Dixon is disabled. He was endangered by Agent Orange while serving in Vietnam. “I hurt. I hurt from something I got fighting for my country,” said Dixon.

Dixon has stage four lung cancer. He doesn’t have much time left. In September, Dixon and his wife went to Topeka for his support group and to pick up his pain medicine.

The Veteran’s Administration in Topeka required him to complete an opiate consent form and take a urine test. Dixon told the pharmacist, “If you want to see if I still smoke marijuana, I do.” Dixon, who typically takes 10 to 15 pills, not all are painkillers, each day was unable to get his prescription filled at the VA.

Under new VA guidelines, veterans complete an “opiate consent form”. The document informs them of the adverse effects of mixing painkillers and pot. In states that permit medical marijuana, veterans are giving the choice of using pot, or their prescribed painkillers, to manage their pain. They can’t use both.

The Veterans Administration is not allowed to recommend marijuana to patients. The agency also can’t take away a veteran’s benefits if they smoke cannabis. But the VA can “modify” the treatment plan and take away painkillers.

Michael Kravitz, president of Veterans for Medical Marijuana Access, told USAToday that many veterans choose the option of pot over prescription painkillers when made to select one or the other.

In one case, a former Marine, Ryan Begin, became unpredictable and reactive while on the prescribed painkillers as he transitioned over to medical marijuana. Begin’s VA physician says the drug, marijuana, is safe and doesn’t lead to overdose. However, the Veterans’ Administration wouldn’t allow Begin to use both.

The solution for many veterans is online pharmacies. Caught between conflicting guidelines, former service members such as Begin can more safely make the shift from opioids to medical marijuana.

Senator Elizabeth Warren, Democrat from Massachusetts, has joined the battle as American political leaders look for a policy response to the widespread abuse of opioid painkillers.

Warren has gone to the Centers for Disease Control (CDC) and asked the agency to research how medical, and recreational, marijuana may alleviate the opioid epidemic. In Warren’s letter to CDC Director, Dr. Thomas Friedan, she pushed the organization to explore every “opportunity and tool” to collect information about alternative pain relief options.

Warren wrote that those options should include marijuana.

Scheduling is a Challenge

Researching marijuana is a problem for agencies as the drug remains a Schedule 1 controlled substance; the most restrictive category in America’s drug laws. The classification is meant for drugs with “no medically accepted use.” It is a designation that makes no sense since more states are legalizing pot for medical treatment.

The scheduling of marijuana makes it difficult for scientists to answer the types of questions Warren is asking. It is a reality that pushed centrist Brookings Institute to call for marijuana to be rescheduled, downward, to Schedule 2. Other drugs in Schedule 2 are prescription medicines Adderall and Ritalin.

Notwithstanding the constraints on researchers, there is some data available about how medical marijuana can serve to stem the harms of pill-popping. JAMA Internal Medicine published a 2014 study which found that states which legalized medical marijuana between 1999 and 2010 saw significantly fewer deaths from opioid overdose.

That study, issued by the National Bureau of Economic Research points out that opiates can be so deadly that overdoses are a leading cause of death from injury in America.

The study’s authors also noted that the states, currently allowing medical marijuana, experienced a decrease, on average, of 25 percent in admissions to addiction treatment programs.

Author Bio: Jerry Nelson, a Vietnam Veteran, is an American writer and photojournalist and  is always interested in discussing future work opportunities. Email him at jandrewnelson2@gmail.com and join the million-or-so who follow him on Twitter @Journey_America.