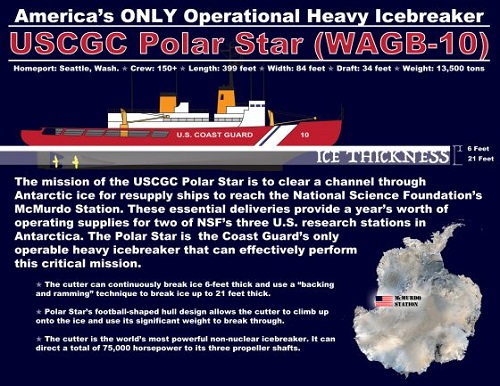 JANUARY 31, 2017 – At the start of the new year, crewmembers from the Coast Guard Cutter Polar Star found themselves on the other side of the world, headed to one of the least hospitable places on Earth, Antarctica. Polar Star’s primary mission is to enable cargo ships to resupply the National Science Foundation’s McMurdo and Amundsen-Scott South Pole stations on the southernmost continent.

Homeported in Seattle, Polar Star is the United States’ only operable heavy icebreaker that is capable of performing in the heavy ice surrounding Antarctica. The cutter is 399 feet long, 84 feet wide, has a 34-foot draft, weighs 13,500 tons and has 75,000 horsepower, which makes it the world’s strongest non-nuclear icebreaker.

“Polar Star is uniquely designed to break ice. It has a rounded football-shaped hull that allows us to ride up onto the ice and use its weight to break through,” said Capt. Michael Davanzo, commanding officer, cutter Polar Star. “This ship was the height of technology when it was designed more than 40 years ago. It is a design that has proven its worth and should continue to perform this unique job until the Coast Guard builds the Polar Star’s replacement using the best attributes of this cutter and the newest technology to propel our service into the future of this mission.”

But why does a Coast Guard cutter operate in Antarctica’s waters?

“A 2005 report to the National Science Foundation stated that the annual resupply effort is ‘a single point of failure for the U.S. Antarctic program,’” said Davanzo. “We are here to help ensure that failure does not happen. We are here to clear a pathway through the ice so a year’s worth of supplies and fuel can safely reach the station.”

Since the Polar Star’s reactivation in 2012, the crew of the cutter deploys during each holiday season, timing the operation with Antarctica’s summer when the ice is at its lowest level. However, the Coast Guard is not the only armed service that supports the southern continent. A multi-service operation, which includes active, guard and reserve personnel from the Coast Guard, Air Force and Navy, is the muscle behind Operation Deep Freeze, the military component of the NSF-managed U.S. Antarctic Program.

In 2017, the ice shelf looks to be considerably larger than in recent years. With an ice field of nearly 70 miles, Polar Star required additional work to ensure the cutter was ready for the challenging mission. Polar Star’s crew of more than 150 people and others spent the past several months ensuring the ship was up to the task of meeting the forces of Antarctica. There have been some hurdles, including a major overhaul in dry dock of the ship’s power plant and a critical galley remodeling project.

“We had a tough summer back home, ensuring Polar Star was up to the mission ahead,” said Davanzo. “We received amazing support from the Long Range Interceptor Product Line with the crew there doing whatever they could to ensure we were ready for the south trip. We also had Coast Guard members from across the country drop holiday plans and leave their families to ensure the ship was running and capable of the mission ahead. The additional support does not go unrecognized, and we are extremely grateful.”

Despite the initial challenges to prepare the cutter and its crew, Davanzo recognizes the uniqueness and excitement surrounding Polar Star’s icebreaking mission.

“For some of the crew, this trip is their first Operation Deep Freeze, but for others this could be two, three or four or more times,” said Davanzo. “Yet, this trip never gets old, and once we reach the ice and get to do what this ship was made for, the crew really gets energized. This is what we do.”