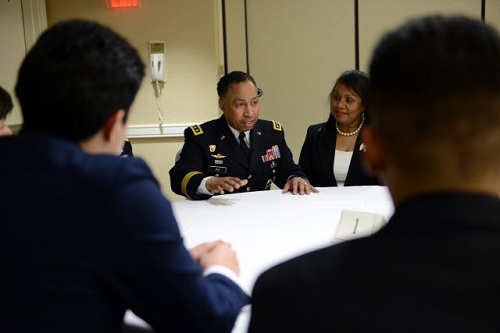 PHILADELPHIA (Army News Service, Feb. 22, 2016) – When’s a good time to start mentoring youth for their futures and to get them interested in science, technology, engineering, and mathematics, or STEM? Right now, said Gen. Dennis L. Via, commander of U.S. Army Materiel Command.

Via was among the 140 senior-level military officers from across the U.S. armed forces, civilian senior executive service professionals, and others, who took part in a Feb. 19 series of STEM-themed mentoring sessions in Philadelphia for high school-aged youth.

The mentoring sessions involved more than 300 youth from Philadelphia, Washington, D.C., Maryland and Virginia, and were part of the military-related Stars and Stripes-sponsored portion of the larger Black Engineer of the Year, or BEYA, STEM conference. The BEYA conference is now in its 30th year.

Via’s Army Materiel Command is home to one of the largest collections of engineers and scientists in the Army — about 12,000 in all. Those scientists, engineers and mathematics professionals will not always work at AMC, he said, they will eventually retire. So now is the time to get American youth interested in such career fields, he said, to prepare them to take over the roles of those who will eventually depart from his own organization and others like it within the other military services.

The defense of the nation, he said, depends on American youth finding their footing in STEM career fields.

“At AMC, our priority is always being able to ensure that our Soldiers have the best equipment and capabilities to perform their mission,” Via said.

AMC professionals are responsible for the researching and development of future systems Soldiers use: from the uniforms they wear, to the weapons they carry, to the platforms they travel in.

Those scientists, he said, are key in ensuring America maintains the “technological advantage we enjoy currently against any other peer competitor in the world. They are constantly in search of the late-breaking technologies, game-changing technologies, to make sure that our Soldiers always have the best technology, the best systems and capabilities to accomplish their missions.”

So today, he said, is the time to lay the groundwork to bring new blood into AMC, by mentoring youth to let them know what is possible for them, and by encouraging them to become involved in STEM career fields.

“That means elementary school and middle school,” Via said. “We have to reach them at that time and make STEM exciting for them. We need to invest in the teachers we have; we need to invest in educational programs, the laboratories and facilities our children are exposed to. We have to ignite a passion in them to want to pursue a career in STEM.”

Via said he knows such a passion exists in youth, and must be tapped so it is not lost. He said he witnesses it first-hand when youth come to visit AMC facilities he oversees, for instance.

“I see the excitement in their eyes when they visit some of our facilities, and they see technology and robotics and autonomous vehicles, and see the new materials we are utilizing to support the men and women in uniform,” he said. “They want to be a part of that. But we have to reach them early.”

In small rooms at the convention center here, small groups of students were able to sit down at a table next to military leaders — high school students next to four-star generals — and ask whatever questions they wanted about possibilities for their own futures. Leaders weren’t talking at students here — they were talking with students.

“We gave them tidbits for success, things we think they should know at this point in time,” Via said. “We talked about the opportunities available. We talked about how important it is to prepare — they are in school now, and they have to work hard in their studies, because the opportunities for them are limitless. We talked about what is available in the area of STEM. And finally, we tried to instill in them to believe in themselves, about what is actually in the art of possible.”

Like Via, many of the mentors involved were general officers and flag officers, both retired and active duty. Civilians from the Senior Executive Service and others were also involved. This year, a total of about 140 mentors participated in the mentoring sessions — the largest number of mentors in the event’s history. More than 300 students participated as mentees — also a record.

Via said that cadre of mentors embodies many years of experience. Access to that experience, he said, can be of great value to youth who are looking for direction on how to move forward on a plan for a successful future.

“Being a mentor means being able to reveal to students the path ahead — things they may not see — but we can, because we have the benefit of time, wisdom and experience. We can share that with them,” Via said. “Mentoring is so critical, especially at this point in their lives, where they are attempting to decide which path they are going to pursue. There are so many competing demands out there, so many distractions that can take them off course.”

Having a mentor, formally or informally, can help students keep on track when such distractions might otherwise lead them astray, Via said.

“I wouldn’t be here today, serving at this level, without numerous mentors throughout my career — mentors that go all the way back to high school,” the general said.

Adm. Cecil E. Haney, commander of U.S. Strategic Command, was one of the 140 mentors who participated alongside Via in Philadelphia. Before the mentoring session officially kicked off, he gave those youth gathered for the opportunity a bit of advice: ask a lot of questions.

“Avoid the feeling of embarrassment of asking a question or two or three,” he said. “I can’t say enough about that. Sometimes it’s unpopular to cause a class to be a little bit longer by raising your hand and saying I don’t understand that. But it’s very important. That’s how we grow and learn. And don’t just do it today. Continue to question things. In my opinion, it makes us a lot smarter.”

He challenged students, before they went into the mentoring sessions, to prepare a question to ask. He also offered them anecdotal evidence — as only an experienced mentor can do — to demonstrate how being prepared to ask a question can keep them from being caught off guard and having to answer one themselves.

Haney said in his youth he attended Eastern High School in Washington, D.C. There, he cited two instructors as having been instrumental in moving him through his education: “Mrs. White” and “Mrs. Driscoll.”

“Mrs. White had that innate ability to understand if Cecil Haney was either not paying attention or didn’t understand the problem — and then it would be ‘get up to the board,'” Haney said. “And consequently, through that business, I learned quickly that I’d better ask Mrs. White the question first before she asked me. That’s where that questioning attitude piece comes from.”

Haney earned the position he holds today, as do all military officers. But for him, he said, mentoring has been part of it the entire way.

In his youth, he said, he had participated in what he called an “experiment” in Washington, D.C., “to take some of us off the street.”

He had been given an opportunity to do a kind of internship at Naval Sea Systems Command at the nearby Naval Yard on the Anacostia River.

“I really got to learn a bit about computers and shipyards and manning at an early age,” he said.

When asked by the Navy employees he worked alongside there about his future, Haney said, he told them he was thinking of going into the Army as an enlisted man. They offered to have him work for them, and they’d send him to college. But he said he wanted to be in the military. At the time, he said, he didn’t know anything at all about the military academies.

“They recognized that deficiency, and had me talk to a Navy captain. That guy didn’t look like me. But he brought me in and explained to me what ROTC is, and the U.S. Naval Academy, and other opportunities that were out there.”

They suggested he work toward being an officer in the Navy, he said.

Haney said he applied to all the service academies, and the U.S. Naval Academy accepted him. There, he said, he was exposed to a whole other level of people and opportunities.

He told students there that they are in a better “tactical position” today to be successful, than he had been at their age, because they now know more than he had known at the time.