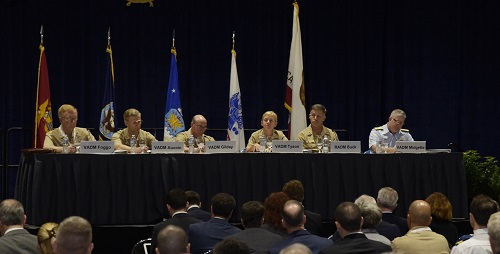 This three-day conference, now in its 27th year, brings military and industry leaders together in a single locale to encourage discussion with the makers of platforms and the designers of technologies impacting the warfighter and information domain. WEST is co-sponsored by Armed Forces Communications and Electronics Association (AFCEA) International and the U.S. Naval Institute (USNI).

Space and Naval Warfare Systems Command (SPAWAR) will host the Navy Information Warfare (IW) pavilion throughout the conference, showcasing some of the most recent efforts to improve cybersecurity and technology in the fleet.

“This is only the second time in WEST’s history where the Navy information warfare community is featured on the exposition floor,” said Lewis. “SPAWAR develops, delivers, and sustains advanced cyber capabilities for our warfighters, which directly impacts the IW mission. We are at the forefront of research, engineering, and acquisition, and we are proud to say that we actively work to keep our forces connected around the globe. WEST is one of our best opportunities this year for SPAWAR to showcase the outstanding efforts of our employees, military and civilian alike.”

The IW mission area encompasses networks, systems, organizations, and people who provide capabilities the Navy needs to fight and win within the information domain. This domain focuses on the electromagnetic spectrum, space, and cyberspace, in addition to the traditional Navy focus areas of surface, subsurface, air, and land.

Richard Jick, a lead engineer and project director, SPAWAR Systems Center Pacific, explained the importance of showcasing new capabilities during WEST — like the Maritime Tactical Command and Control — to not only military and industry leaders, but the Sailors who will eventually operate these systems on ships.

The IW pavilion demonstrates the Navy’s commitment to warfighting in the information age through the use of speakers, panels, subject matter experts, and capability displays from organizations including the Office of the Deputy Chief of Naval Operations for Information Warfare (N2N6), Fleet Cyber Command/U.S. 10th Fleet, Navy Information Forces Command, SPAWAR, and others.

“This is my first WEST and I’m excited to see what all is being developed and designed,” said Cociffi. “Personally being assigned to DDG 1001, our ship is all about automation. We have a smaller crew size, but our ship will perform [certain mission areas] better due to new technologies. Seeing everything today, I realize even more what our world and our Navy has to offer.”

“The GunnAR is a great trainer,” said Cociffi. “I went through security reaction force alpha and bravo training, and there is a similar trainer available, but nothing like what I experienced today. Trainers like this not only save a lot of money because no rounds are expended, but are a lot of fun, too.”

“This year at WEST, we are building on what we have done in the past,” said Tighe. “This is a great opportunity for industry and military leaders to come together and learn more about information warfare.”