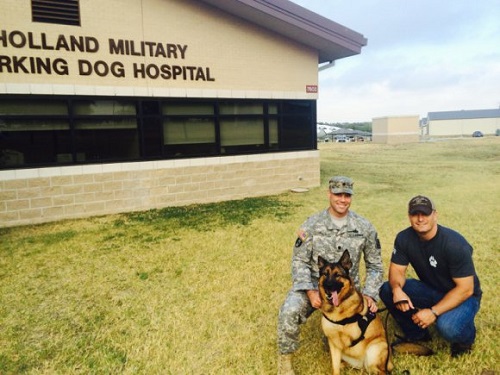 APRIL 21, 2016, SAN ANTONIO – Lucca, a U.S. Marine Corps specialized search dog, made history when she received the United Kingdom’s People’s Dispensary for Sick Animals Dickin Medal, considered the highest military honor for animals world-wide, on April 5, 2016. As part of the Military Working Dog program, over her six-year career, Lucca personally ensured the safe return of all the American troops she accompanied on more than 400 patrols she completed during three deployments in both Iraq and Afghanistan.

The care and treatment of these heroic animals across the DOD is one of the responsibilities of the U.S. Army Veterinary Corps. Currently, every dog in the program has come through the DOD Working Dog Center on Lackland Air Force Base, and the DOD Military Working Dog Veterinary Service is responsible for providing comprehensive veterinary care for as many as 900 dogs and puppies housed on Lackland, including TSA working dogs undergoing training on site as well. Holland Military Working Dog Hospital, part of the DODMWDVS, is the only Level 4 Veterinary Hospital in the DoD, and has unique joint responsibilities.

Lt. Col. James T. Giles III, DVM, is currently the Chief of Surgery at the DoDMWDVS, and is also the veterinary surgeon that operated on Lucca when she was medically evacuated to Kandahar. He worked with a team of veterinary and human surgical providers to ensure a smooth surgery and recovery after the blast that took her left, front paw.

“The military working dogs are incredibly vital to the safety of our troops,” Giles explained. “Their entire existence, what they do, saves human lives, and our job is to keep them healthy and make sure they are fit to do their job, and then do everything we can to repair them when they are injured.”

Military Working Dogs are a vital part of today’s fighting force. They were used in WWII and Vietnam as sentries, and as the use of working dogs became more common, they have been employed with greater frequency in military operations. During the most recent wars in Iraq and Afghanistan, where improvised explosive devices have been the insurgents’ weapon of choice, K9 teams that go out on patrols to detect explosives are the best defense against IEDs.

During his time at Kandahar, Giles served with the veterinary detachment responsible for the treatment of more than 1,500 dogs stationed with their handlers in Afghanistan. Apart from just operating on the animals that were transported to his hospital, Giles often provided training to the doctors, nurses and medics in military working dog emergency treatment. Many injured working dogs will not see a veterinarian or technician at the initial point of injury, or even during the evacuation, so those medical personnel on the medevac flights, along with the handlers who receive MWD first aid training as a part of their schooling, are the first to treat and stabilize any dogs injured on patrol.

Used across all services and for many different tasks, MWDs have saved the lives of hundreds of
our men and women serving in harm’s way. Although the care and treatment of military working dogs is only one piece of a complex mission carried out by the U.S. Army Veterinary Corps, it is a mission that is vital to the safety of our warfighters serving in combat environments.

Col. Robert von Tersch, commander of the Public Health Command-Central (Provisional) spoke at the London ceremony on behalf of Army Public Health and the Veterinary Corps, noting the care for the health and well-being of the military working dogs throughout their service.

“Lucca’s loyalty and dedication are equal to any Warfighter’s, two-legged or four-legged, and her service illustrates what an essential role these intelligent and beautiful animals play not only in our defense, but also in our civil society with first responders and their search and rescue mission,” von Tersch said. “Lucca’s continued activities and appearances bring awareness of this role to the public, helping to foster a greater appreciation for their duty to our Nations as well as for veterinarians and technicians whose professionalism and expertise go into caring for and treating these animals.”