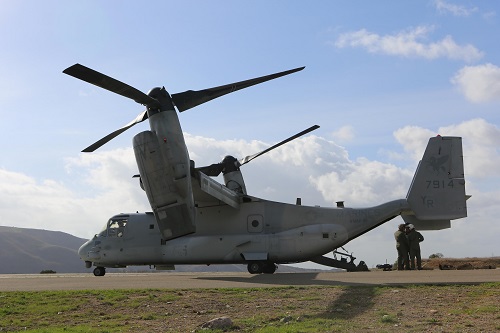 The “Greyhawks” are conducting DFT in preparation for their deployment with the 15th Marine Expeditionary Unit (MEU) next year.

A MEU is one of the components of the Marine Air-Ground Task Force. A MEU is made up of four elements: ground combat, aviation combat , logistics combat and command.

As part of the two-week long exercise, the squadron is scheduled to conduct several different training missions to hone their tactics, techniques and procedures in an effort to advance the overall readiness of the squadron.

“Some of the missions we will be accomplishing in our DFT include day and night tactical recovery of aircraft and personnel, long range raids, and [aerial refueling] with Marine Aerial Refueling Transport Squadron (VMGR) 352,” said Maj. Adam Johns, a pilot and the operations officer with VMM-161.

The squadron is also expected to conduct training missions in humanitarian assistance/disaster relief, noncombatant evacuation operations and mass casualty, added Capt. Gary A. Andres, a pilot and the current operations officer with VMM-161.

Because the squadron is required to complete its certification to deploy prior to joining the 15th MEU, they will be evaluated on their mission skills throughout the exercise.

“The people in our organization have been there, and they have a baseline of what they think is right and wrong, but it’s great when you have an outside perspective because they can take a fresh look that’s unbiased, and they can evaluate a unit on its capabilities,” said Capt. Patrick McCammond, a pilot and an administration officer with VMM-161.

More than 150 Marines and up to eight MV-22B Ospreys are projected to support the exercise.

According to Johns, the exercise is having a huge impact on the Marines because of how they have had to adapt to the change in operating environment and transition to an expeditionary mindset.

For the majority of the Marines, they see the impact of the training on how they will operate on the deployment, which makes them realize the reasons why they joined the Marine Corps in the first place—to do their part in contributing to this elite fighting force, Johns continued. VMM-161 is dedicated to completing their squadron’s mission, as well as maintaining mission readiness.

“You can’t fly aircraft without personnel, the most valuable asset of any squadron are the Marines themselves,” said McCammond.