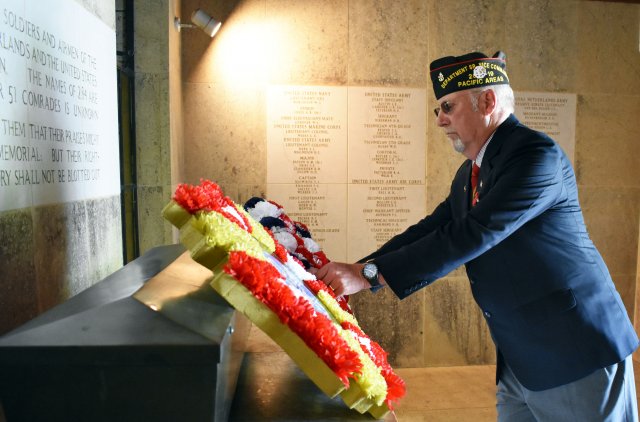 MAY 28, 2019, YOKOHAMA, Japan – After surviving the Bataan Death March during World War II, 2nd Lt. Darwin C. Becker spent more than two years as a prisoner of war in the Philippines before Japanese forces decided to ship him to Japan.

That ship made it to Moji Harbor, Japan, but Becker, 29, died upon arrival of acute enteritis, or inflammation of the small intestine, on the docks Jan. 30, 1945, with 30 of his comrades.

Becker is among 58 U.S. service members commemorated at the Yokohama War Cemetery’s Yokohama Cremation Memorial, and members of Camp Zama’s Veterans of Foreign Wars Post 9612, as well as other area VFW posts, honored him and all fallen service members during a Memorial Day ceremony May 26 at the cemetery.

“We present our love, we present our honor and we present our remembrance on this day to those who have sacrificed so much,” said Mike Lutman, commander of the Veterans of Foreign Wars of the U.S. Department of Pacific Areas, District 2 Mainland Japan, during his speech.

During his keynote speech, Lutman called on members of Congress, leaders of veterans groups and all U.S. citizens to help and support the families of those missing in action in Vietnam.

“They still sacrifice and they still suffer,” Lutman said. “Vietnam is not over for them. They cannot rest until they know the fate of those they loved and watched march off to serve their country. Our dedication to their cause must be strengthened with these events here today.”

Rick Farris, senior vice commander, Veterans of Foreign Wars of the U.S. Department of Pacific Areas, Post 1054, also spoke, and said Memorial Day is not “barbecue day,” but instead is a day to remember those who have fallen and sacrificed for their nation.

“I love this day; I love this place,” Farris said. “I think there’s no better place to have a Memorial Day service, and remember those who have given so much, than at this place right here at Hodogaya.”

The other service members included in the memorial died of dysentery, complications of pneumonia, beriberi (caused by low levels of vitamin B1), and malnutrition in Moji in the following months, according to the War Department’s information action sheet and POW records.

The men as a whole belonged to a variety of units from the Army, the Army Air Forces (the predecessor to the Air Force), the Navy and Marine Corps and came from states that spanned from Connecticut to California.

Many of the men, including Becker, had endured trips on three ships on their way to Japan, according to POW camp records from the POW Research Network of Japan, and due to the bombings and conditions on board, many did not survive.

“Of the 1,619 POWs who boarded Oryoku Maru on Dec. 14, 1944, 497 arrived in Moji,” according to “American POWs on Japanese Ships Take a Voyage Into Hell, Part 2,” in Prologue magazine by Lee A. Gladwin. “An estimated 500 died aboard the Brazil Maru during the voyage from Takao (Japan) to Moji.”

Becker, a native of Brenham, Texas, joined the New Mexico National Guard at Fort Bliss, Texas, and was a member of the NMNG’s 515th Coast Artillery Regiment at his death. He died with two other members of the NMNG’s 200th Coast Artillery Regiment and the 515th CA Regt. nearby. About 1,800 Soldiers from the units deployed to the Philippines in 1941, according to the New Mexico Military Museum, and many of them participated in the 66-mile Bataan Death March.

Becker, an enlisted Soldier, received a battlefield promotion to second lieutenant, according to the Bataan-Corregidor Memorial Foundation of New Mexico, Inc.

Jan Stringer, who posted a photo of Becker on the “Find-A-Grave” website, said via email that Becker is her husband Robert Stringer’s nephew.

Becker was a member of the science club and airplane club in high school, but the family does not know much about his military service except that he survived the Bataan Death March and did all he could to help his fellow POWs in captivity, Stringer said.

“From family stories, he did a lot to help fellow prisoners by stealing extra food, medicine and clothes for them,” Stringer said. 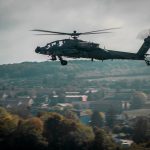