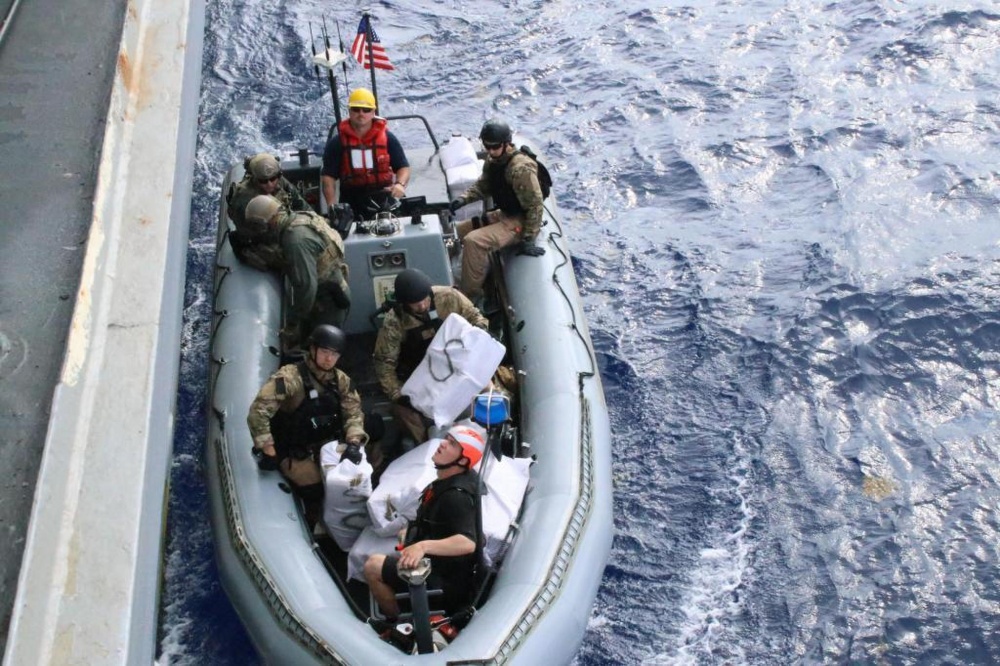 In a coordinated effort, the small boat crew from Lassen along with the LEDET were launched to the scene to further investigate.

Upon arriving on scene, the Lassen and the embarked LEDET recovered a total of 65 packages of marijuana, totaling more than 3,500 pounds.

“This is an excellent example of the teamwork aboard Lassen,” said Cmdr. Judson Mallory, USS Lassen Commanding Officer. “Our ships and aircraft have unique capabilities and our teams worked well together to conduct this operation safely and successfully.”

On April 1, U.S. Southern Command began enhanced counter-narcotics operations in the Western Hemisphere to disrupt the flow of drugs in support of Presidential National Security Objectives. Numerous U.S. agencies from the Departments of Defense, Justice and Homeland Security cooperated in the effort to combat transnational organized crime. The Coast Guard, Navy, Customs and Border Protection, FBI, Drug Enforcement Administration, and Immigration and Customs Enforcement, along with allied and international partner agencies, play a role in counter-drug operations.

The fight against drug cartels in the Caribbean Sea requires unity of effort in all phases from detection, monitoring and interdictions, to criminal prosecutions by international partners and U.S. Attorneys in districts across the nation. The law enforcement phase of counter-smuggling operations in the Caribbean Sea is conducted under the authority of the 7th Coast Guard District, headquartered in Miami. The interdictions, including the actual boardings, are led and conducted by members of the U.S. Coast Guard.

Navassa is an uninhabited island in the Caribbean Sea between Haiti and Jamaica administered by the U.S. Department of Interior.