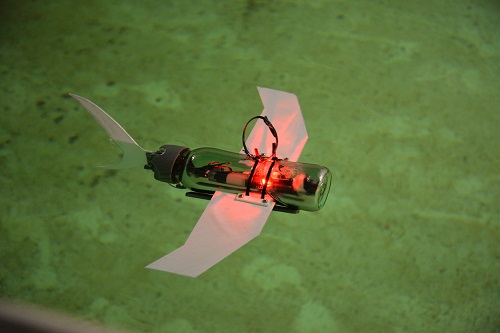 JANUARY 24, 2017, WEST BETHESDA, Md. (NNS) – As the world becomes more technologically advanced, so grows the need for experts to deal with its complexities. Today, there is a shortage of American students pursuing careers in Science, Technology, Engineering and Math (STEM).

In response, the U.S. Department of Education began a STEM initiative to cultivate student interest in these fields by implementing STEM activities into school curriculums across the country.

With the popularity of SeaGlide® and its quick expansion to schools throughout the Washington, D.C., area, and amid recent interest from school programs all over the country and even internationally in places including Beijing, Carderock’s Director of Technology Transfer Dr. Joseph Teter said it was time to protect SeaGlide with a trademark to preserve the integrity of the program as a U.S. Navy brand.

“We had just started producing glider kits a few years ago for STEM classes,” Teter said. “Michael Britt-Crane was the lead person at Carderock that developed the sea glider as a STEM teaching aid. We wanted to make them widely available because SeaGlide is garnering more and more interest from schools and organizations wanting to participate.”

“The trademarks — which to my knowledge are Carderock’s first two ever — give us sort of quality control over future kits that are developed,” Teter continued. “In particular, and thinking forward for Carderock, if we go down the road of trademarking some of our software products, this gives us the same protection whereas we can control the versions that come out and make sure that they’re good and they satisfy and represent what we wanted to do with that software package. Trademarks prevent people from creating an inferior product and passing it off as belonging to Carderock and the Navy.”

SeaGlide® was started under a three-party Cooperative Research and Development Agreement between Carderock, the Naval Undersea Warfare Center, and a foundation called the Association for Unmanned Vehicle Systems International (AUVSI). According to Teter, AUVSI is making the kits, essentially assembling all the parts to prevent schools from having to go out and source each part from several different locations. He said being able to provide instructors and the student with everything they need to build their glider is part of the appeal.

The Department of the Navy now holds trademarks for the term “SEAGLIDE” without claim to any particular font style, size, or color; and a branding logo which is a mark that consists of the term “cglide” with a line through the middle of the wording “glide” above a swirl line that leads to a glider. The latter is the logo placed on the underwater glider kits which are assembled and distributed by AUVSI.

Teter worked closely with Michael Badagliacca, an intellectual patent attorney with the Office of Naval Research, to register the trademarks through the United States Patent and Trademark Office. A former engineer who made a career move to focus on the legal aspect of research and invention, Badagliacca is responsible for several of the Navy’s trademarks including “Navy SEALs,” the “America’s Navy” slogan, unit and command insignias, and aircraft names like the more recent EA-18G “Growler.”

“A trademark is like a brand name; for this product we want the word to get out that there’s a neat underwater glider and now people know to ask for SeaGlide®,” Badagliacca said. “When people request the Carderock underwater glider they know it’s called SeaGlide®, they know where to go, and they know exactly what product we’re talking about instead of someone else’s — which might not be as good as the one we have.”

Michael Britt-Crane, a mechatronics engineer with Carderock’s Hydrodynamics and Maneuvering Simulation Branch pioneered SeaGlide® along with a handful of his fellow engineers at Carderock who volunteer part-time to work with students and educate instructors on bringing SeaGlide® to their schools.

Although building an underwater glider containing a circuit board for soldering and programming, buoyancy engines with syringes and moveable mass to manage buoyancy and pitch, and ballast gliders for proper underwater flight may seem too complex for learning basic electronics and physics, Britt-Crane said SeaGlide® is the perfect STEM program.

“As an intro-level robotics activity where kids can get out of their books and get their hands dirty as kind of a starting point for building bigger and better robots in the future, it’s a perfect entry point to get broad-based understanding of how these systems work at a fundamental level,” Britt-Crane said.

Britt-Crane’s parents were engineers, and he said when he was in elementary school he would always say he wanted to be an inventor because he didn’t know the term engineer.

“That’s changed since then, but I think that’s illustrative of the kind of disconnect between the public knowledge of science and engineering and those of us who are in the profession, and that’s what we’re really working to try to improve,” Britt-Crane said.

While SeaGlide® is designed for high-school students, Britt-Crane and his team have worked with instructors teaching students as young as sixth graders and even had higher-level education organizations like the Marine Robotics Team at the Massachusetts Institute of Technology build gliders.

Besides being an activity for students, Britt-Crane pointed out there are many ways the SeaGlide® gliders align with the Navy’s interest when it comes to unmanned vehicles and unmanned vehicle systems. According to Britt-Crane, the completed gliders are fully functional as unmanned vehicles and have reached depths of 25 feet in Carderock’s basin. He said he is confident they could go deeper, having done some pressure testing with the structure in super-deep depths, but they have not yet tested the motor at deep depths.

“I think SeaGlide® would be an ideal platform to train operators of these drones,” said Britt-Crane. “We can do the basic build in two days and we can do training for Navy personnel to really understand how these things work, and that’s really important.”

“Our primary mission in regards to SeaGlide® is reaching as many schools and having plenty of exposure, so that as many kids as possible are at least — even if they don’t go into STEM fields — getting a better understanding of engineering,” continued Britt-Crane. “It’s useful for us to have a well-educated public that understands science and engineering.”

As SeaGlide® continues to expand, Britt-Crane emphasized the program continues to look for new partners and work with as many Department of Defense labs as possible. He said the goal is to continue to reach as many kids as they can, because STEM education in schools through programs like SeaGlide® will help inspire future engineers to secure the future of innovation.