The missile was tracked on a southerly azimuth, officials said. Initial indications are that the first stage fell into the Yellow Sea. The second stage was assessed to fall into the Philippine Sea.

Initial indications are that the missile deployed an object that appeared to achieve orbit, officials said.

The missile or the resultant debris, officials added, never posed a threat to North America. 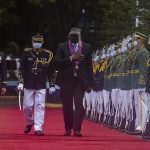