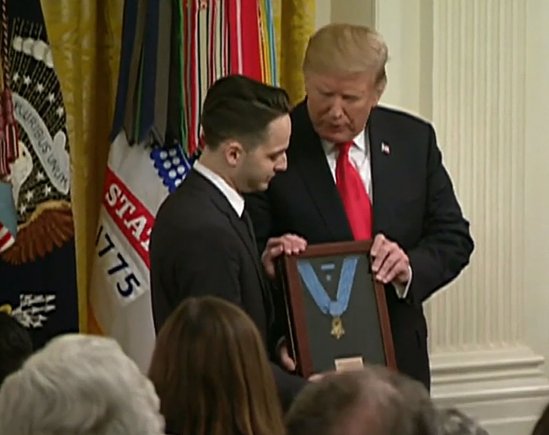 MARCH 28, 2019 – Travis Atkins didn’t hesitate the June morning when he saw the insurgent reach for a suicide vest underneath his clothing. With his fellow Soldiers mere feet away, Atkins knew he had to act quickly before the enemy’s bomb detonated.

The staff sergeant wrapped his arms and body around the insurgent to shield three Soldiers from the brunt of explosion.

“In his final moments on earth, Travis did not run,” President Trump told a White House audience during Atkins’ Medal of Honor ceremony Tuesday afternoon. “He shielded his men from certain death.”

Atkins’ actions took place during the height of the Surge, in the midst of some of the most vicious fighting of the Iraq War.

“He was stationed in a hotbed of terror,” Trump said.

The morning of June 1, 2007, Atkins and his three-man squad patrolled through Abu Samak, Iraq, in the outskirts of Baghdad, when they received a report of two suspected enemy troops attempting to cross a nearby route.

Atkins left the Humvee and approached one of the men. As Atkins searched the man for weapons, the insurgent resisted, Trump said. During the struggle, the enemy reached for his vest. Atkins, quickly realizing the man wore a suicide bomb, covered and shoved the insurgent to the ground. The blast killed Atkins instantly, the president said.

“He rose to the highest calling,” Trump said. “He laid down his life to save the lives of his fellow warriors.”

The morning before his passing, Atkins called his son, Trevor, in the United States to wish him a happy 11th birthday. It would be the final time Atkins spoke to his son. Now 22, Trevor took the podium to accept the medal on his father’s behalf.

“It’s something that I can’t really put into words,” Trevor said as he looked at an audience that included Atkins’ parents, Jack and Elaine, his sister, Jennifer, and his extended family. Fifty members of his father’s unit, the 10th Mountain Division, also were there.

“It’s something that’s surreal and I still haven’t fully accepted it yet,” Trevor said.

After coming home from Iraq, he returned to civilian life for a while, but he soon re-enlisted in the Army again, returning to the infantry’s ranks.

“That’s where he wanted to be,” Trump said. “He loved everything about being with the troops.”

Atkins came from a military family. His father served as a paratrooper in Vietnam. His uncle and cousin also served in the armed forces.

Nearly 12 years after his passing, the president said Atkins will join a select few in the military’s history.

“Your father’s courage and sacrifice will live for all time,” Trump told Trevor. “And every time we see our stars and stripes waving in the sky, we will thank [him].”