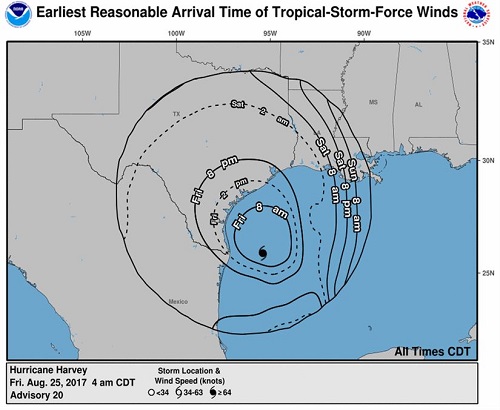 AUGUST 25, 2017, AUSTIN, Texas – At the request of Gov. Greg Abbott through the Texas Division of Emergency Management, about 700 members of the Texas Army National Guard and Air National Guard and the Texas State Guard with the Texas Military Department have been activated and are pre-positioning throughout the state ahead of Hurricane Harvey’s landfall later this week.

Guard members also are pre-positioned in Victoria and College Station, with other locations expected as the storm track becomes clearer, officials said. Members of the Texas State Guard are mobilized to provide local shelter operations and Electronic Tracking Network assistance in the affected counties.

“This is what we train for,” said Army Brig. Gen. Patrick M. Hamilton, commander of the Domestic Operations Task Force. “And we’re proud to stand beside our civilian partners, first responders and volunteers to serve the citizens of Texas.”

The Texas Military Department will continue to work with the Texas Division of Emergency Management to project additional personnel and equipment requirements as needed based on the impact of Hurricane Harvey and the needs of the state, officials said.

Hurricane Harvey is the first hurricane to make a direct landfall on the Texas coast since 2008.