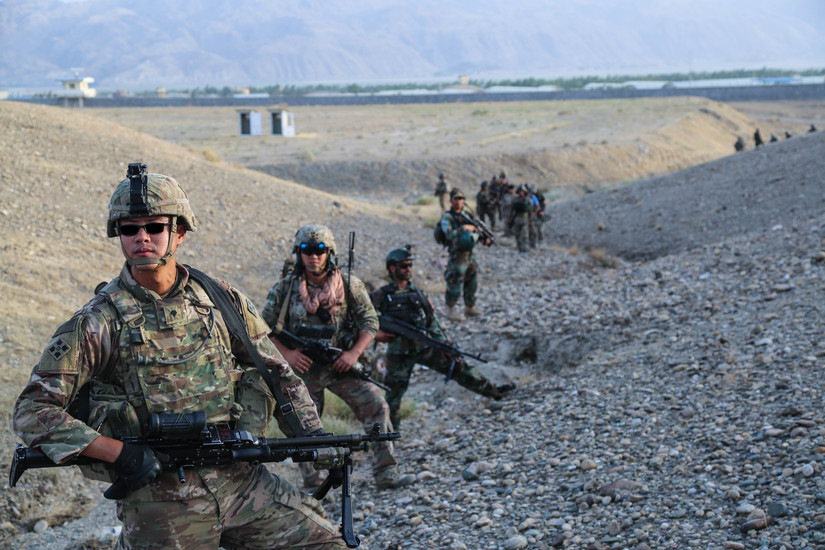 MARCH 3, 2020 – The joint declaration between the United States and the Afghan government is the best chance to bring peace to Afghanistan and return U.S. service members home, Defense Secretary Dr. Mark T. Esper said during a news conference today.

Under the agreement signed Saturday in Doha, Qatar, the Taliban must negotiate with the Afghan government and agree not to allow the country to be used as a haven for terrorists intent on attacking the United States and its allies.

If the Taliban honors the agreement, all foreign troops may be out of Afghanistan in 14 months.

Army Gen. Mark A. Milley, the chairman of the Joint Chiefs of Staff and veteran of many tours of duty in Afghanistan, also supported the declaration. “A negotiated political settlement is the only responsible way to end the war in Afghanistan,” he said during the news conference.

Milley reiterated that the declaration would not have been possible without the thousands of soldiers, sailors, airmen and Marines who have served and sacrificed over the last 18 years.

He said the United States owes an extraordinary debt of gratitude to America’s sons and daughters who made the ultimate sacrifice and to their families who have given their all to this nation.

But Esper said the declaration is just a first step. The U.S. and other coalition forces will continue to support Afghan security forces against terrorists whenever they emerge. “My message to the coalition was to stay vigilant because we still have a long and difficult mission ahead of us,” the secretary said.

There were reports of Taliban attacks on government troops today. U.S. officials are watching the situation closely. Milley said the Taliban is not a monolithic group. Some of the terror groups under the rubric of the Taliban are only loosely controlled. Afghan and coalition forces will examine the attacks to figure out who is responsible and take the necessary steps against the perpetrators.

Both Esper and Milley cautioned people not to expect an absolute cessation of violence in Afghanistan. “This is a significant step forward, … and it’s going to lead to inter-Afghan dialogue and ultimately leads to a peace agreement,” Milley said. “But to think that (the violence) is going to go to zero immediately, that probably is not going to be the case.”

Through this process, the United States will secure its national security interests, they said. Of primary importance is ensuring Afghanistan is not a base for terrorism. “We’ll maintain whatever capabilities necessary to defend the United States against terrorists,” Milley said.

Esper said the number of U.S. troops in Afghanistan will be reduced, and that process is starting. “The agreement says that we reduce down to 8,600 it within 135 days … and that drawdown would begin in the first 10 days,” he said. “My instructions to the commander was, ‘Let’s get moving. Let’s show our full faith and effort to do that.'”

The secretary said the coalition forces can still conduct the necessary missions with a force of 8,600.