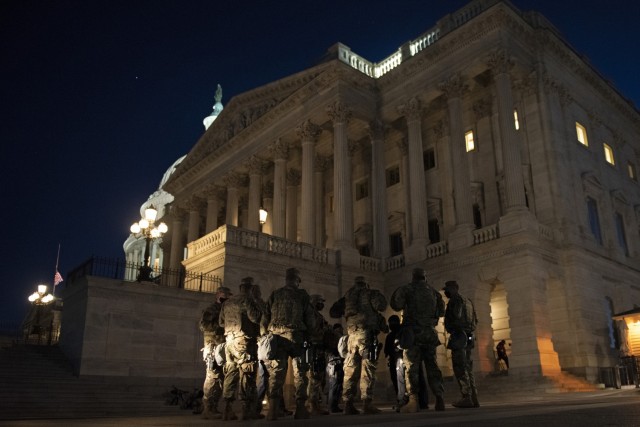 APRIL 8, 2021 — When discussing the most recent rotation of National Guard members providing support to the U.S. Capitol Police following the events of Jan. 6, Army Col. Kevin Crawford doesn’t go by his official title as Chief of the Army National Guard’s operations division.

“Synchronizer-in-chief,” he said, is a more fitting description.

“At the end of the day, there are only so many resources we have — and the two most important resources are people, and then time,” explained Crawford. “The last thing you want is a Soldier to sit on a duffel bag for a week because nobody synchronized the flow of Guard members into the capital and optimized their time.”

After the Secretary of Defense approved the mission, Crawford said the details of filling in anticipated logistical gaps swung into motion.

“We stepped into the breach and did that synchronization across the states,” he said.

A good portion of those synchronization efforts involved determining what assets were needed to successfully execute the mission, as well as when and how Soldiers and Airmen would come to the Washington, D.C. area.

“My team developed a force flow matrix — so by state we know when people are coming in and how they are coming in,” Crawford said.

From there, that information is handed off to the DC Guard.

“Capital Guardians have worked tremendously hard to ensure the Guardsmen who arrive in D.C. have everything they could need to accomplish this mission,” said Army Lt. Col Craig M. Hunter, acting Chief of Staff for the DC Guard’s operations directorate. “The DC Guard is leading the way in providing lodging, food and transportation to Guard members throughout the days.”

This is still important, Crawford said, even as the security mission has dwindled down to about 2,300 Guard members from more than 26,000 during the 59th Presidential Inauguration.

“There are the details that people don’t see — but it’s all part of the planning construct,” Crawford said, adding what started as a contingency, evolved into execution, and then became an “operations plan.”

While the National Guard Bureau works with units on getting personnel to the District, the states determine the number of those troops they can send.

States and territories must factor in missions they are currently executing – including domestic and overseas missions. For example, more than 31,000 National Guard members are currently supporting COVID missions across the country.

Pointing to the Gulf states, as an example, Crawford said Guard leaders there had to determine what future requirements might happen when deciding how many Guard members to send.

“The Gulf is dealing with COVID and its vaccine rollout as hurricane season approaches,” he said, noting that participating in other missions may consume the “ramp up period” needed for natural disaster response.

Crawford added that Guard units send Soldiers under a command structure, as opposed to sending individual personnel to link up with others.

“When the Guard has been able to do something that has smaller requirements they can do a little bit of ad hoc,” he said. “But when they’re talking about something as large as the Capitol mission and coordinating the billeting and the food for the troops — that all comes through a chain of command.”

To support the mission, visiting Guard members go on state active duty orders — otherwise known at Title 32 — under a volunteer or non-volunteer status.

Part of this status designation, Crawford said, stems from ensuring units have the required number of qualified personnel to support crucial missions without disrupting their professional, civilian lives.

But state active duty orders do not change the type of benefits Guard members are eligible for, nor does it affect their mandate to carry out the mission.

Regardless of their status, Hunter said Guard members have continued to exhibit how crucial they are to local officials, especially with the recent activation of an Immediate Response Force after a fatal incident involving the death of a Capitol policeman April 2.

“On multiple occasions, the Capitol Police have stated the support the National Guard provides is invaluable,” said Hunter. “They consider the Guard an indispensable partner.”