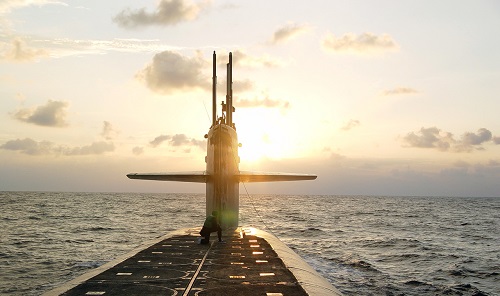 Rear Adm. Randy B Crites, Commander, Submarine Group 10, was the guest speaker for the ceremony. During his remarks, he commended Buchanan for his outstanding performance as Squadron 20’s commodore. “Commodore Buchanan, your performance as commander of Submarine Squadron 20 has been superb,” said Crites. “I cannot emphasize how vitally important the work is that we do here and the Submarine Squadron 20 under Commodore Buchanan’s leadership is squarely at the center of this impressive mission that is absolutely foundational to our survival as a nation.”

Buchanan, a native of Vallejo, Calif., credited the personnel at Kings Bay for his successful tour as Squadron 20’s commodore.

“No other location in our great nation has contributed more to ensure world peace than this little southeast corner of Georgia, said Buchanan. “I can say without a shadow of a doubt that this particular commodore job is the best-kept secret in the submarine force.”

Crites awarded Buchanan with the Legion of Merit for his service as commodore.

“It is a great honor to be here today with all of you and to be back in St. Marys,” Wirth said. Working together with team Kings Bay to support, serve and lead our Sailors in our nation’s most important mission.”

Buchanan will report to the Joint Chiefs of Staff in Washington for his new assignment.