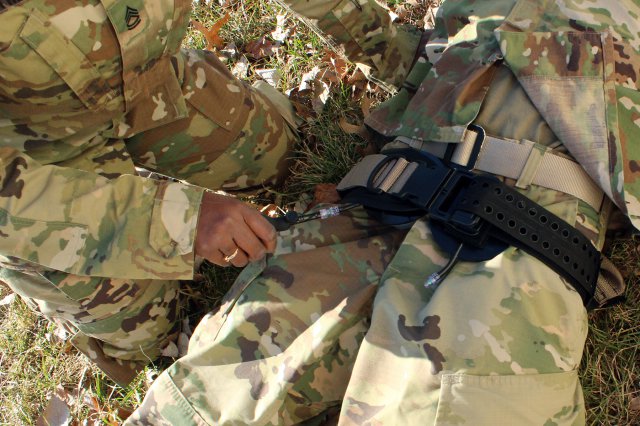 FORT DETRICK, Md. (March 2, 2016) – The U.S. Army Medical Materiel Agency (USAMMA), a subordinate command within the U.S. Army Medical Research and Materiel Command (USAMRMC), is fielding a new junctional tourniquet designed to save warfighters from dying on the battlefield after injuries to the groin or armpit area.

The SAM™ junctional tourniquet, which weighs about one pound, straps on like a belt and includes two inflatable air bladders that medics can inflate individually or both at the same time. The device is designed so that a person can position it in under a minute–a crucial factor for combat medics who only have mere minutes to save a fellow warfighter’s life if he or she is hemorrhaging.

Exsanguination, or bleeding to death, is the most common cause of potentially survivable death to wounded warfighters. Groin and pelvic injuries have become increasingly common because of the enemy’s use of Improvised Explosive Devices. Blasts from IEDs often cause pelvic fractures and high leg injuries, which result in massive blood loss (i.e., hemorrhage) if not immediately treated.

“One of the unique elements about this device is that it is easy to carry and use, yet incredibly effective when used properly,” said Megan McGhee, a biomedical engineer and product manager assigned to the Project Management Office for Medical Devices at USAMMA.

McGhee explained that some other junctional tourniquets models required assembly and were bulkier.

“If it is going to be something that we want Soldiers to carry on the battlefield and use, it has to be not only simple to use but also as small and light-weight as possible,” said McGhee.

The U.S. Food and Drug Administration cleared the SAM™ junctional tourniquet in 2013 for inguinal (i.e., groin area) use. The device was also later cleared for axillary use (i.e., armpit), as well as for pelvic binding.

Tourniquets are not new technology. The Combat Application Tourniquet, which was also developed by the USAMRMC, is standard issue to all deploying Soldiers. In a case of a bleeding emergency, a Warfighter can use a tourniquet to stop the flow of blood temporarily. Nevertheless, the Combat Application Tourniquet does not work on junctional injuries, which is why a specific junctional tourniquet is necessary.

The U.S. Army Institute of Surgical Research (USAISR), as well as the Naval Medical Research Unit San Antonio (NAMRU-SA), tested the junctional tourniquet to ensure it met the needs of the warfighter. Additionally, the USAMRMC Test Branch performed altitude testing.

In addition, the USAMMA understood that warfighters would need a way to carry the device. Industry experts developed an attachable sack — a molle bag — that could fasten to the combat medic’s main M9 bag. USAMMA worked with them to provide feedback that informed design changes and subsequent training information provided with each tourniquet. Additionally, the Army’s Capability Development Integration Directorate (CDID) performed form fit and function tests.

Each device comes with a training DVD and simple step-by-step instructions printed on the actual tourniquet as well as on an instructional card. The U.S. Army Medical Department Center and School staff is also training new combat medics on how to use junctional tourniquets.