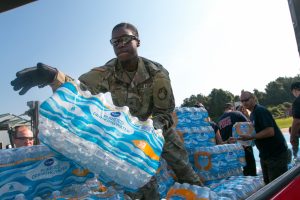 SEPTEMBER 5, 2017, Hempstead, Texas – Hurricane Harvey was a storm that will last for a long time in the minds of those who experienced its wrath. While the memory of the storm’s destruction may have created terrible memories for some, it has been a demonstration to the team of service members from around the United States of Texans’ generosity.

“We got here yesterday and were extremely overwhelmed by the outpouring of support by the members of the communities,” said Col. Geoffrey J. Kent, 4th Sustainment Brigade commander. “We consider it an honor to support and serve these communities,” said Kent.

Kent and his team of Soldiers from Fort Carson, Colo began support to the people of eastern Texas on Sept. 3 when they arrived at Hempstead, Texas. At a car dealership loaned to U.S. Army North and subordinate units, Kent and the group set up their operations.

One of the other units at the dealership is the 75th Field Artillery Brigade from Fort Sill, Okla. They drove nearly 400 miles to support relief operations after completing a two-week field training exercise.

“We knew we were going to help civilians and the Soldiers were excited to come, excited to help,” said Lt. Col. Toni Rieke, commander of the brigade’s 100th Brigade Support Battalion.

When the unit departed Oklahoma, it did not expect to find communities so eager to offer support to the Soldiers. Among the support service members have received are numerous residents offering vocal support and, true to regional stereotypes, beef.

“We came self-sustaining, but coming into a location like (the car dealership) is definitely a benefit and a morale booster for the Soldiers,” said Rieke.

What the Soldiers have experienced has been more common than one might think for an area declared a disaster area by the President of the United States. At locations throughout eastern Texas, including Houston Executive Airport, the dealership at Hempstead, and other places, residents have provided barbecue dishes and other freshly-prepared dishes.

The call to assist Soldiers was sent via social media and Texas residents responded. One of those who responded was Earlyne Campbell, the daughter of a Navy chief petty officer who served in World War II and the Korean War.

“It is so great to serve the military because (they) serve us,” said Campbell. “We want to do something and we’re going to keep doing this as long as (they) all are here, because we really love and appreciate what (they) all do.

According to data gathered by U.S. Army North, (they) have provided 2,100 Soldiers and civilians, 58,000 Meals-Ready-to-Eat, 1,015 pallets of water, 391 pallets of food, 90 boats, over 200 trucks along with cots, medical supplies and equipment have been transported by units responding to support efforts. Relief operations by active duty troops are expected to continue for several more weeks before the National Guard reassumes the entirety of relief support.