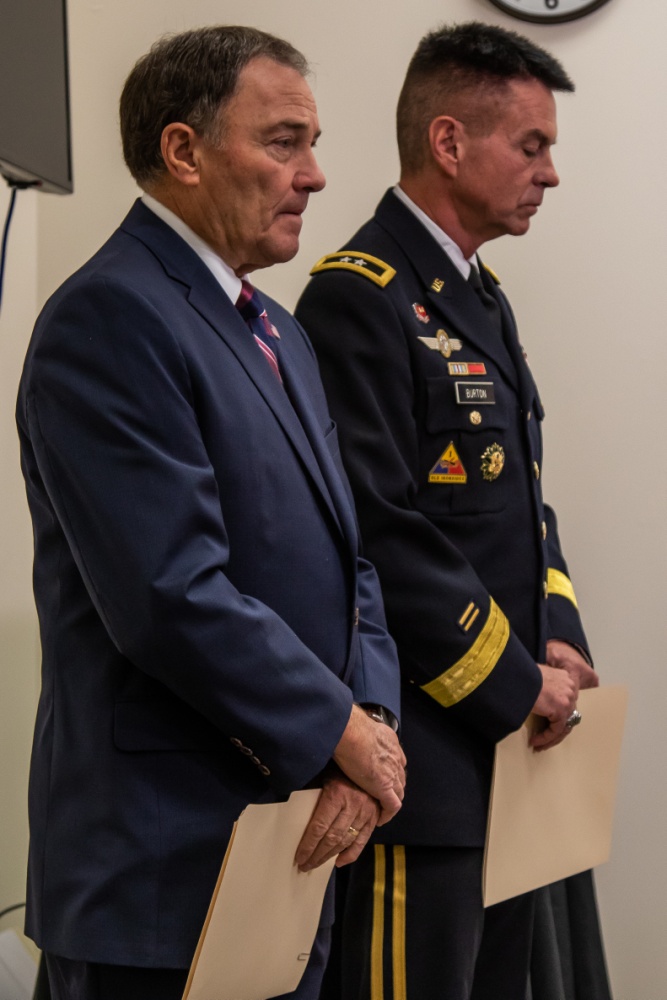 Maj. Gen. Jefferson S. Burton, adjutant general of the UTNG and Gary S. Herbert, governor of the State of Utah, identifed Taylor at a press conference Nov. 4 at the UTNG headquarters in Draper, Utah.

The apparent insider attack was carried out by a member of the Afghan National Defense and Security Forces and reportedly killed by other Afghan Forces. The investigation of the incident is ongoing.

In a packed press conference, Burton was reflective on the service, life and sacrifice of Taylor as a Soldier and community leader.

“Today we mourn the loss of a remarkable American,” said Burton. “Maj. Brent R. Taylor was a patriot whose personal life resonated with excellence. From his commitment to education, to his passion for politics, Brent was dedicated to making a difference. Our thoughts and prayers are with his wife Jennie, his equal in every way, as she and their children cope with this tragic loss.”

This was Taylor’s fourth deployment. He deployed twice to Iraq in 2006 and again in 2007, supporting Operation Iraqi Freedom, where he received a Purple Heart and a Bronze Star Medal for his exceptionally meritorious service. In 2012, he continued his service to country with a deployment to Afghanistan in support of Operation Enduring Freedom.

Herbert addressed the audience and spoke about his personal relationship and memories of Taylor as a community leader and representative.

“He was the personification of love of God, family, and country. I do note that he volunteered,” said Herbert. “That’s an admirable quality that we all ought to emulate. What can we do to help our fellow man?”

Taylor served as a member of the North Ogden City Council, and elected as mayor in 2013. He deployed after being elected to his second term. He was also a doctoral candidate at the University of Utah.

“Look at the life of Maj. Taylor and maybe try to be better,” said Burton, after the press conference. “Try to step up a little more in your community. Coach little league. Be somebody that people can depend on. Be a good husband, father, wife, mother, sister, brother. Be the best that you can be.”

Taylor is survived by his wife Jennie and their seven children.

Service members and units from the UTNG have been continuously deployed since 2001. Currently there are more than 800 UTNG service members deployed worldwide.