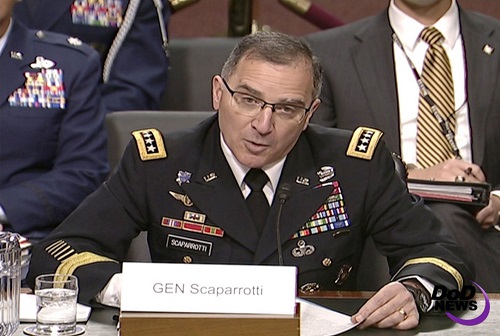 MARCH 27, 2017, WASHINGTON – Threats from violent extremists and a resurgent Russia require both strong U.S. capabilities in Europe and a sustained commitment to the NATO alliance, the senior U.S. military leader in Europe told the Senate Armed Services Committee here Thursday.

Army Gen. Curtis M. Scaparrotti, commander of U.S. European Command and NATO’s supreme allied commander for Europe, told the committee that the current European strategic environment is the most dynamic it has been in recent history.

The European theater holds about a billion people and its trade is roughly half of the world’s gross domestic product, the general said.

Scaparrotti said the transatlantic NATO alliance confers a unique advantage over adversaries. It is, he said, a united, capable warfighting alliance resolved in its purpose and strengthened by shared values that have been forged in battle.

“EUCOM’s relationship with NATO and the 51 countries within our [area of operations] provides the United States with a network of willing partners who support global operations and secure international rules-based order,” he said.

Political volatility and economic uncertainty in Europe are compounded, the general said, by security threats that are “transregional, multidomain and multifunctional.”

“In the east, a resurgent Russia has turned from partner to antagonist as it seeks to reemerge as a global power,” Scaparrotti said. “Countries along Russia’s periphery, including Ukraine and Georgia, struggle against Moscow’s malign activities and military actions.”

In the southeast, he said, “strategic drivers of instability converge on key allies, especially Turkey,” which faces simultaneous threats from Russia and terrorists coupled with the challenge of refugee flows.

To the south, the general said, violent extremists and transnational criminal elements “spawn terror and corruption from North Africa to the Middle East.”

In the north, Scaparrotti said, Russia is reasserting its military presence and positioning itself for strategic advantage in the Arctic.

Scaparrotti noted that Europe faces “a difficult challenge” from extremists connected to or emulating the Islamic State of Iraq and Syria.

“Europe is challenged by both a flow of terrorists returning to Europe from Syria and other places, [and] they’re challenged by an internal threat of those inspired by ISIS or directed by ISIS,” he said.

“The number of threat streams that we have of this type within Europe — it’s probably higher in Europe than any other part of the globe, with the exception of the places we’re actually physically fighting them, like Syria … Afghanistan and Iraq,” the general said.

Scaparrotti expressed his condolences to those injured or killed in Wednesday’s terrorist attack in London, which left three people dead and at least 20 others injured.

“Our thoughts and prayers go out to these victims and their families impacted by this senseless attack,” he said. “We strongly condemn this attack and will continue to stand shoulder-to-shoulder with our NATO ally and our partners to defeat terrorism.”