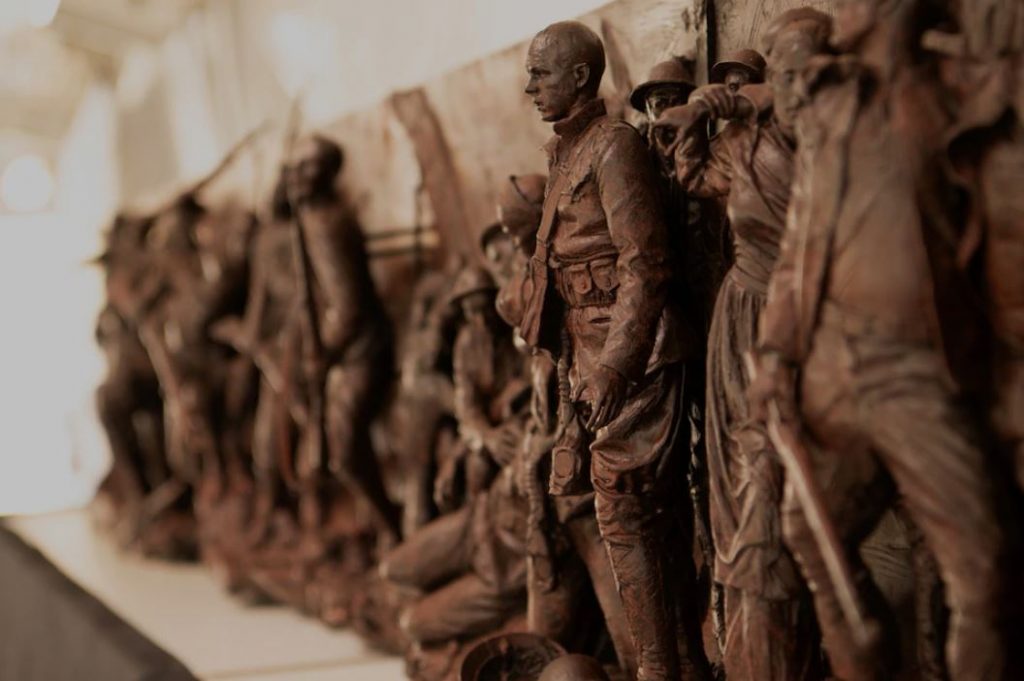 NOVEMBER 20, 2020 – The iconic red poppies are back and being offered as a symbol of remembrance and commemoration of World War I, and all fallen military service members.

A century ago, “the war to end all wars” raged throughout Europe. It was a war that racked up nearly 38 million casualties, including upwards of 8.5 million deaths. From 1914 to 1918, World War I took a greater human toll than any previous conflict. The Great War, as it was then known, also ravaged the landscape of Western Europe, where most of the fiercest fighting took place.

Across northern France and Flanders, in northern Belgium, the brutal clashes between Allied and Central Powers soldiers tore up fields and forests, tearing up trees and plants and wreaking havoc on the soil beneath.

It was from these devastated landscapes of the battlefields that something surprising and striking took place. Bright red blooms began to appear.

“They had been burying the bodies of military men, and a few women, as they came off the battlefield, as quickly as possible,” explained retired Marine Corps Master Sgt. William Ponder, president of Veterans of Foreign Wars post 12039, out of Victorville, California. “They were dying so fast, and they began burying them in a place called Flanders Hill. They called it ‘planting the bodies.’ They were buried with simple little crosses.”

Then in the warm early spring of 1915, the bright red poppies began peeking through the battle-scarred land: Papaver rhoeas, known variously as the Flanders poppy, corn poppy, red poppy and corn rose.

These poppies grow throughout the United States, Asia, Africa and Europe and is native to the Mediterranean region. Its seeds need light to grow, so when they’re buried in the earth, they can lay dormant for 80 years or even longer by some accounts, without blooming. Once soil is disturbed and the seeds come to light, poppies nobody knew existed can then bloom.

Lt. Col. John McCrae, a noted Canadian physician before the war, served with Canada’s First Brigade Artillery as a surgeon at a field hospital in Belgium. He worked within sight of poppies blooming across old battlefields and fresh graves. McCrae tended to the wounded and got a firsthand look at the carnage of that clash, in which the Germans unleashed lethal chlorine gas for the first time in the war adding greatly to the number of deaths, to include a friend of McCrae’s, Lt. Alexis Helmer.

Struck by the sight of bright red blooms on broken ground, McCrae wrote a poem, “In Flanders Field,” in which he channeled the voice of the fallen soldiers buried under those bright red poppies. Published in Punch magazine in late 1915, the poem has been used at countless memorial ceremonies, and has become one of the most famous works of art to emerge from the Great War. Its fame had spread far and wide by the time McCrae himself died, from pneumonia and meningitis, in January 1918.

“They were dying so fast, and they began burying them in a place called Flanders Hill. They called it ‘planting the bodies.’ They were buried with simple little crosses.” retired Master Sgt. William Ponder, a president of Veterans of Foreign Wars Across the Atlantic, a woman named Moina Michael read “In Flanders Field” in the pages of Ladies’ Home Journal that November, just two days before the armistice. She was a professor at the University of Georgia at the time the war broke out. Michael had taken a leave of absence to volunteer at the New York headquarters of the Young Women’s Christian Association, which trained and sponsored workers overseas. Inspired by McCrae’s verses, Michael wrote her own poem in response, which she called “We Shall Keep Faith.”

As a sign of this faith, and a remembrance of the sacrifices of Flanders Field, Michael vowed to always wear a red poppy; she found an initial batch of fabric blooms for herself and her colleagues at a department store. After the war ended, she returned to the university town of Athens, and came up with the idea of making and selling red silk poppies to raise money to support returning veterans.

Michael’s campaign to create a national symbol for remembrance—a poppy in the colors of the Allied nations’ flags entwined around a victory torch—didn’t get very far at first. In mid-1920, however, she managed to get Georgia’s branch of the American Legion, to adopt the poppy, minus the torch, as its symbol. Soon after that, the National American Legion voted to use the poppy as the official U.S. national emblem of remembrance when its members convened in Cleveland in September 1920.

A Frenchwoman named Anna Guérin was a champion of the red poppy symbology and as such was invited to the American Legion convention to speak about her idea for an “Inter-Allied Poppy Day.” Madame Guérin helped convince the Legion members to adopt the poppy as their symbol, and to join her by celebrating National Poppy Day in the United States the following May.

Nations, a century after World War I ended, millions of people in the United Kingdom, Canada, France, Belgium, Australia and New Zealand don the red flowers every November 11, known as Remembrance Day or Armistice Day, to commemorate the anniversary of the 1918 Armistice.

In the United States, the tradition has developed a little differently. Americans don’t typically wear poppies on November 11, Veterans Day, which honors all living veterans. Instead, they typically wear the symbolic red flower on Memorial Day, the last Monday in May, to commemorate the sacrifice of so many men and women who have given their lives fighting for their country. Protocols do allow, though, for the red poppies to be worn at any time, in somber reverence for those lost in war.

Regardless of the time of year, or holiday celebrated, the red poppies are an ongoing visual representation of respect and appreciation for those who have served.

“My wife and I have 14 family members who have served in every war and conflict from WW1, The Great War, to present day,” said Martin Mills, Range Operations officer aboard MCLB Barstow. “Our family has severed in all four branches of the military: Army, Air Force, Navy, Marines and the Coast Guard. I feel remembrance is important in a few ways such as honoring those who have served and remembering those who have died so that our great nation can keep the freedoms we cherish. May we never forget.”