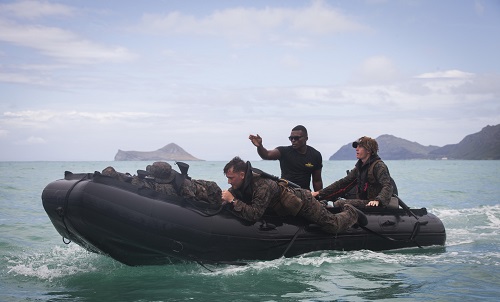 “The exercise we just completed was an evaluated 2k fin,” said Cpl. Samuel Perry, a reconnaissance raider team operator with 3rd Radio Battalion Reconnaissance. “When we got to the shore, we worked as a buddy pair of two scout swimmers. One held security while the other took his fins off. Then we rotated and took the beach by force.”

For the exercise, Marines were given an hour to make it to the shoreline from the insertion point carrying their weapons, dry uniforms, and a 50-pound sandbag. In addition to swimming over a mile with more than 65 pounds of gear, the Marines also had the unpredictability of the ocean to consider.

“It’s way different than the pool, that’s for sure,” said Cpl. Ryan Ehlers, an RRT operator with the platoon. “When you get out there, some of the swells get pretty big. You think you’re just going to ride over the top of it, and all of a sudden you get a face full of saltwater. You just have to cough it up, spit it out, and keep going.”

Despite the difficulty and challenges of their exercises, the Marines in the RRT operator’s course feel privileged to have the opportunity to train at such a high level.

“I’m exactly where I want to be,” said Lance Cpl. Collin Covington, an RRT operator with the platoon. “I’ve been pushed beyond a lot of limits, more than I thought I would be before joining. It’s been tough, but I’ve learned so much, and it’s the best job I could possibly have right now.”

This training is critical to increasing the combat readiness and effectiveness of the unit, as well as positively impacting unit cohesion. It also serves to maintain the high standards that raider reconnaissance teams and reconnaissance elements are known to adhere to, said Sgt. Antuan D. Martin, the lead instructor of the course.

In addition to upholding individual standards, Martin aims to make his Marines understand their roles fully and be prepared for any situation they may face.

“I’m hoping they grow,” Martin said. “I want them to grow as a team, as well as individually, so when they are put in real life situations, it won’t be the hardest thing they’ve ever done.”