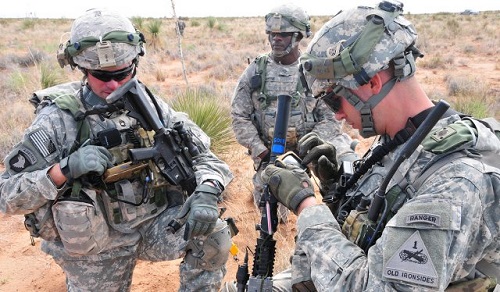 “More than 12,000 miles separate the earth from GPS satellites, and the signal power received is very low and fragile,” said Charlie Miller, chief of the Command, Power, and Integration Directorate’s Positioning, Navigation and Timing division, which is under the Army Materiel Command’s Communications-Electronics Research, Development and Engineering Center, or CERDEC. “Our goal is to develop innovative, non-satellite technologies that can substitute for GPS when its signal is temporarily compromised.”

One of these technologies is called pseudolites, which is a word-blend of “pseudo and satellite” and includes satellite-like transmitters that function similarly to GPS, but instead of signals coming down from space, they are transmitted closer to the Earth and reside in platforms such as a tent, vehicle, or low flying aircraft.

Pseudolites are part of a multi-faceted solution for operation in GPS-denied environments under development in the Army’s Direct Reporting Program Manager Positioning, Navigation and Timing, or PM PNT. Established in 2015, PM PNT is chartered to address critical issues and initiatives for PNT capabilities across Army portfolios. CERDEC is leveraging its 40-plus year expertise in highly technical PNT research and development efforts to refine and mature pseudolite solutions.

“Pseudolites’ close proximity to the ground allows Soldiers to obtain position information in environments that GPS ordinarily struggles to reach, including forests, valleys and canyons, or even partially within city buildings,” said John Delcolliano, CERDEC CP&I PNT Integrated Systems Branch chief. “Pseudolites are also harder for the enemy to jam versus the GPS signal.”

“It is like having a radio that tells you where it is located,” Delcolliano said.

The pseudolite transmitter, which includes a powerful anti-jam antenna, will send out a signal to a modified GPS receiver. The receiver will make a range measurement to determine how far away it is from the pseudolite to determine location.
The Army will initially retain current fielded GPS receivers that will just require software updates to be compatible with pseudolites.

“It will be the same as obtaining a software upgrade for a Garmin or cellphone, and as such, will reduce the overall program costs and enable a more rapid fielding schedule,” said Kelly Fang, CERDEC CP&I PNT lead engineer.

Each pseudolite navigation system may also contain inertial measurement units, or IMUs, consisting of gyroscopes and accelerometers to provide a non-GPS dependent position solution. While inertial navigation may be a “throw-back” positioning technique and provides information that is less accurate than GPS, CERDEC is employing them as a solution that provides enough stand-alone capability to allow the Soldier to complete his or her mission should GPS become temporarily compromised.

“Inertial navigation, along with additional aiding technologies, may buy a Soldier just enough performance capability to keep on course during a critical mission, at least until GPS is restored,” Delcolliano said.

To address the overarching requirement for position information during all missions, CERDEC is looking to integrate pseudolites into mission command planning tools, effectively expanding pseudolites into a command and control capability. The current plan for pseudolites is to strategically locate enough units to ensure proper coverage across the battlefield.

“By providing the commander with a bird’s eye view of all Soldier and pseudolite positions, he would have the required situational awareness to relocate the pseudolites, or Soldiers, until enough PNT coverage is available for the Soldier to complete the mission,” said Amelia Fortmayer, CERDEC CP&I PNT engineer.

The first pseudolite proof of concept demonstration occurred in 2011 at White Sands Missile Range with support from the Defense Advanced Research Projects Agency and industry. The success of the demonstration played a pivotal role for the Army to establish PM PNT, and laid the groundwork for CERDEC’s latest research and development efforts, which include literally reaching for the stars to investigate celestial navigation as a viable option for pseudolites.

“A celestial solution consists of a camera that looks at the stars and recognizes patterns so the pseudolite can pinpoint its location on earth without GPS,” Fang said. “It will have stored star maps to compare to location information in the database, and could eventually track the sun and moon too.”

Terrain matching is another planned capability that will use a database of stored maps as a point of reference and a camera to photograph current terrain. The solution will compare the photo to the stored maps to achieve accurate position location information.

Terrestrial-based signal transmission, though localized to a region, has been proven to address the pervasive threats to Soldiers’ position location information, no matter the source of the interference.

“If we transmit signals closer to the users, we leave very little space for anything, or anyone, to come between our Soldiers, their safety and their mission,” Delcolliano said.