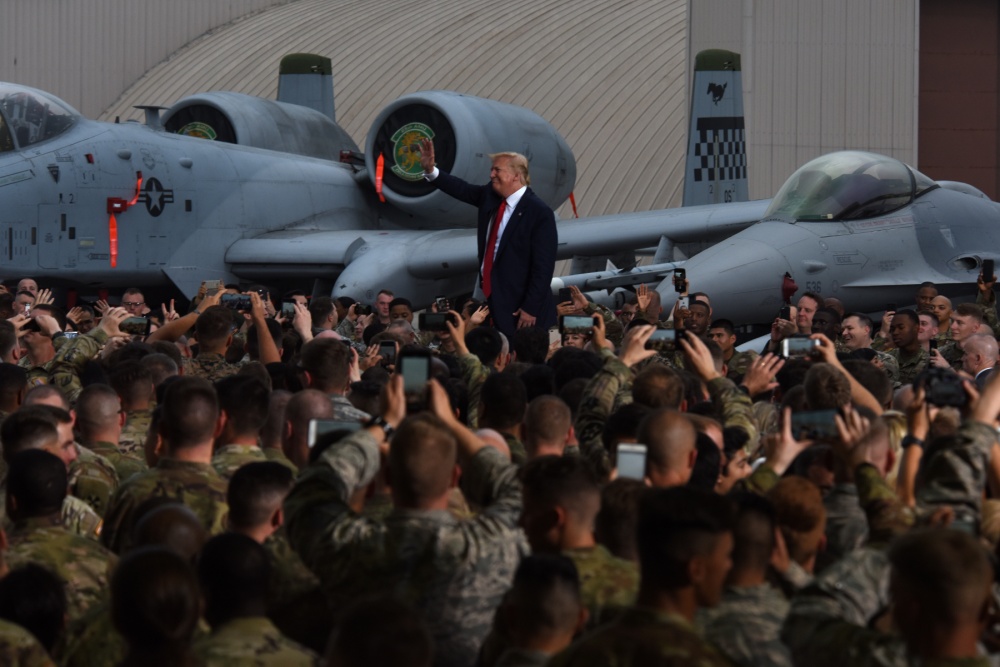 JULY 1, 2019 – OSAN AIR BASE, Republic of Korea – For the first time in U.S. presidential history, the President of the United States, Donald J. Trump, stepped onto North Korean soil, meeting with Chairman Kim Jong-un as part of a two-day visit to the Korean peninsula, June 29-30, 2019.

Reliving the historic moment, Trump addressed troops charged with maintaining stability in the region from all joint services under U.S. Forces Korea at Osan Air Base.

“We had a great meeting,” said Trump. “We are in this together and want to get this thing solved. It has been going on a long time.”

Hundreds of joint service members and dependents gathered to hear the president’s message.

“To all the service members from U.S. Forces Korea, today I am here to tell you that 330 million American hearts beat with a gratitude for your selfless service,” he said. “We are also joined by many amazing military spouses and families. They keep you going and you wouldn’t be the same without them.”

Trump was accompanied by Secretary of State, Mike Pompeo, and his daughter and advisor, Ivanka Trump.

“It is wonderful to get a chance to see the fighting men and women of America,” said Pompeo. “Thank you for what you do to serve America each and every day.”

“God bless America and God bless each and every one of you for being out here, for everything you do and your sacrifices and your service,” she said. “We are very grateful to you and your loved ones who serve our nation out of uniform.”

Trump also shared his enthusiasm for the Department of Defense budget increase allowing for production of new aircraft, ships and tanks, but recognized military members as the ultimate asset.

“Together the men and women of America’s Armed Forces are the most extraordinary warriors ever to walk the face of the earth,” he said. “You stand ready to vanquish any danger and deliver the full might of American justice whenever and wherever duty calls … You are prepared to deter, defeat and defend against any threat.”

Trump closed with a moment of gratitude.

“Let me thank every warrior in the audience who serves a righteous mission,” he said. “You are fantastic. I salute you. Our nation will never forget the sacrifices of every American service member here today and those stationed throughout the world … No one is tougher and no one is braver.”