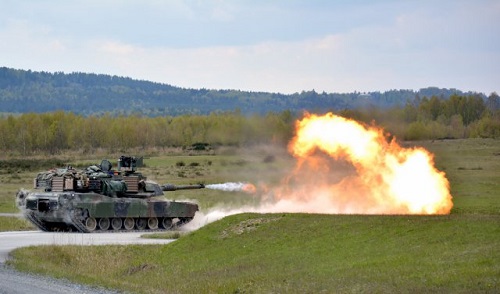 Capt. Chris Garlick, the commander for Company D, 2nd Battalion, 7th Infantry Regiment, said the gunnery tables are the first test of the tank crew’s ability to close with and destroy the enemy.

“[Qualifying] means they are a qualified crew that is prepared to go to war or continue training at the collective level,” said Garlick. “It’s the ultimate test for tank crews before they move on to collective training for sections and platoons.”

The battalion will shoot their Gunnery Table X and XII later in May at Grafenwoehr to make sure their sections and platoons can efficiently shoot, move and communicate before taking part in Anakonda 16 in Poland in June.

Anakonda 16 is a Polish-led exercise taking place in Poland June 7-17. The exercise will include over 25,000 participants from 24 nations, supporting assurance and deterrence measures by demonstrating allied defense capabilities to deploy, mass and sustain combat power.

Companies will be shooting a company combined arms live-fire exercise as a part of Anakonda.

“At Anakonda we’ll actually have the entire company out there doing collective level training with the live-fire,” said Garlick. “To be certified to do that we first have to certify our crews, sections and platoons here in Germany.”

An infantry company from the Republic of Georgia will be attached to 2nd Battalion, 7th Infantry Regiment, throughout Anakonda. Garlick stated his Soldiers are looking forward to training with their NATO allies and partners and build off the lessons learned from previous rotations to Europe.

“We’ve learned a lot about radio communications and how we could and could not communicate with our allies,” said Garlick. “That’s really set the tone where we are a lot more proficient at it now.”