The aircrews conducted aerial refueling operations during tanking missions to extend their flight range, reducing the number of required landings and shortening the mission timeline.

The flight demonstrated the aircraft’s long-distance capabilities and the advantages it provides over traditional helicopters, according to Gunnery Sgt. Wade M. Davis, an MV-22B tiltrotor crew chief with VMM-265, MAG-36.

“I used to work with the (CH-46E Sea Knight helicopter) and if we wanted to do this kind of movement, we would have had to use the ships to transport them,” said Davis. “This trip would have taken at least seven days instead of four.”

The Ospreys flew to Clark Air Base, Republic of the Philippines, Aug. 2 before flying to Darwin, Australia, Aug. 3 and finally to Townsville, Australia, Aug. 4. The Ospreys rendezvoused with the USS Bonhomme Richard Aug. 5 where they remained, while the KC-130Js returned to MCAS Futenma.

The introduction of the Osprey to the Marine Corps has increased the operational agility of units and expanded their response capabilities, according to Capt. Timothy E. Osterhout, a KC-130J pilot with VMGR-152.

“As long as they have a steady supply of fuel, the Ospreys are capable of moving across even greater distances,” said Osterhout.

Being part of such an operation served as a memorable experience for the crew because of the history they helped make with the Osprey, according to Lance Cpl. Justin F. Montgomery, a KC-130J fixed-wing aircraft crew chief with VMGR-152.

“The Ospreys are capable of long, sustained flight and we proved that,” said Montgomery. “I got to be a part of history, gain more experience in the process, and I enjoyed it.”

Due to the success of the flight, more long-distance Osprey missions are likely to occur in the near future as VMM-265 continues to expand its capabilities.

“I was proud to see the outcome of weeks of planning come to fruition,” according to Capt. Tristan G. Martinez, a KC-130J pilot with VMGR-152. “They were able to complete the mission and return in a timely manner. It was great to be a part of this historic flight, and we look forward to more in the future.” 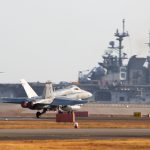 NOVEMBER 29, 2021 – U.S. forces with 1st Marine Aircraft Wing and the U.S. Navy’s 7th Fleet conducted a joint rehearsal of tactics and simulated strikes on naval targets off the coast of Okinawa, Japan, Nov. 19. Between the two services, the participating aircraft platforms included the F/A-18 (C, E, and F variants), E-2D, and […]