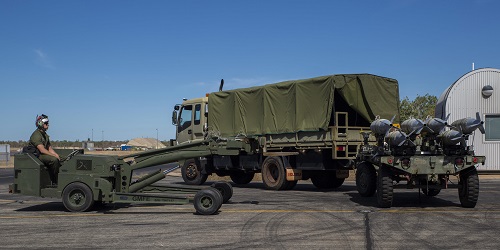 “During Southern Frontier our main objective is to get the pilots and Marines trained and qualified in high explosives,” said Staff Sgt. Jerrod Gelbaugh, ordnance staff noncommissioned officer in charge with VMFA-122. “The East Coast has limited ranges for high explosive training, so when we get to travel for this training, it’s a really big deal.”

VMFA-122 is home based out of Marine Corps Air Station Beaufort, South Carolina and are currently assigned to MAG-12 at MCAS Iwakuni under the Unit Deployment Program. Australia is the last stop on the squadron’s deployment before heading back home.

“In the past three days, we’ve dropped approximately 129 bombs,” said Lt. Col. Derek Brannon, commanding officer of VMFA-122. “It’s important to me that my pilots are comfortable, trained and prepared to drop explosives when the need arises. It really was a team effort between MALS-12 ordnance and VMFA-122 ordnance to construct such a high volume of bombs in a short amount of time.”

Brannon said the squadron dropped ordnance in Iwakuni and at Kadena Air Base over the last six months preparing for Southern Frontier. The exercise is a rare opportunity for these Marines to experience a new environment and train with real bombs.

“This is a unique environment for all of us because all we’re doing here is straight high explosives,” said Cpl. Javon Franklin, an aviation ordnance technician with VMFA-122. “We have to maintain a constant state of awareness and not grow complacent when working with high explosives. Back home or in Iwakuni, we only handled inert explosives.”

Ordnance dropped during Southern Frontier are made at RAAF Tindal. Munitions were shipped to Australia in June, where they had to be scrubbed down to meet customs requirements, and then transported to Tindal. MALS-12 ordnance Marines then put the components together and passed the high explosive off to VMFA-122 ordnance to be inspected and loaded on the aircraft.

Among the many responsibilities of ordnance Marines, safety is a top priority when working around high explosives. Gunnery Sgt. Erich Heyner, ordnance chief with MALS-12, explained that carelessness can cause an explosion, but the explosion isn’t what hurts Marines, it is the blast wave.

“Safety is every step of the way,” said Heyner. “From transporting munitions out of the bomb yard, inspections and testing to make sure they are in service life to ensure the bombs will not detonate prematurely; these Marines trust each other to follow procedure, successfully and safely accomplishing their goals.”